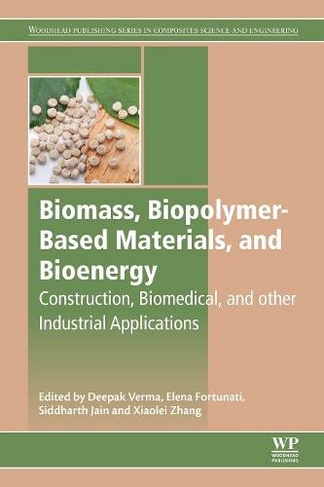 Also available on eBook for £249.95. Click here to purchase from Rakuten Kobo

Deepak Verma is currently working as an Assistant Professor, in the Department of Mechanical Engineering, at Graphic Era Hill University, Dehradun, India. He received his M.Tech from the College of Technology, GBPUA&T Pantnagar, India. He has more than 7 years of experience in teaching, research, andworking within industry. His research interests include: Hybrid Reinforced/Filled Polymer Composites, Advance Materials: Graphene and Nanoclay, Wood fiber Reinforced/Filled Polymer Composites, Modification and Treatment of Natural Fibres and Solid Wood Composites, and Polymer blends. He has published 2 books, 16 book chapters, and more than 10 International journal papers in reputed journals. Elena Fortunati, graduated in 2007 in Materials Engineering and she was awarded a Ph.D. in Nanotechnology of Materials at the University of Perugia,in 2010. Since January 2011 she has been a researcher (post-doctoral) at the Civil and Environmental Engineering Department/Faculty of Engineering /Materials Science and Technology (STM) Group. She has attended and spoken at over 30 International Conferences and is author of more than 50 articles in refereed journals and book chapters, most of them concerning waste re-valorization and use, extraction of cellulose nanocrystals and their use in nanocomposites for industrial applications. Siddharth Jain is currently working as an Associate Professor, in the Department of Mechanical Engineering, College of Engineering Roorkee, Roorkee, India. He received his M.Tech and PhD from the Indian Institute of Technology, Roorkee in the area of thermal and renewable energy. After graduation from IIT Roorkee, he worked for one year at the National University of Singapore, as a post-doctoral fellow and also worked for another year at the University of Alberta, Canada, as a post-doctoral fellow on Renewable energy. The majority of his research has been devoted to investigate the production of power, fuel,and chemicals from renewable energy resources, mainly: kinetic, and mechanism studies on biomass thermal conversion processes and integral techno-economic and environmental assessment on renewable energy systems. Xiaolei Zhang is a lecturer at the Clean Energies research group in the school of Mechanical and Aerospace Engineering, Queens University, Belfast UK. She earned her B.Sc and M.Sc from North China Electric Power University, China, 2007 and 2009, respectively, both in thermal engineering. She received her Ph.D. in 2013 from the Royal Institute of Technology-KTH, Stockholm, Sweden. Her doctoral study was macro- and micro-scale modelling of the biomassthermal conversion process. After graduation from Sweden, She worked for one year at the University of Alberta, Canada, as a post-doctoral fellow, on the integral techno-economic and life cycle assessment (energy analysis, economic analysis, and GHG emissions calculation) on processes of biomass gasification, liquifaction, co-firing, etc.