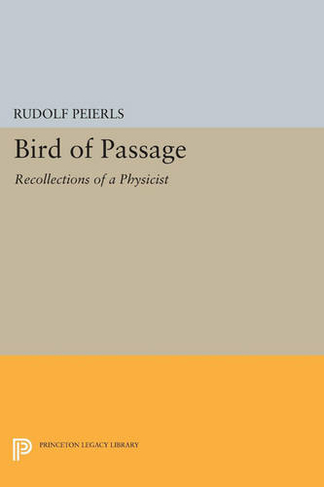 Bird of Passage: Recollections of a Physicist (Princeton Legacy Library)

Here is the intensely personal and often humorous autobiography of one of the most distinguished theoretical physicists of his generation, Sir Rudolf Peierls. Born in Germany in 1907, Peierls was indeed a bird of passage," whose career of fifty-five years took him to leading centers of physics--including Munich, Leipzig, Zurich, Copenhagen, Cambridge, Manchester, Oxford, and J. Robert Oppenheimer's Los Alamos. Peierls was a major participant in the revolutionary development of quantum mechanics in the 1920s and 1930s, working with some of the pioneers and, as he puts it, "some of the great characters" in this field. Originally published in 1985. The Princeton Legacy Library uses the latest print-on-demand technology to again make available previously out-of-print books from the distinguished backlist of Princeton University Press. These editions preserve the original texts of these important books while presenting them in durable paperback and hardcover editions. The goal of the Princeton Legacy Library is to vastly increase access to the rich scholarly heritage found in the thousands of books published by Princeton University Press since its founding in 1905.