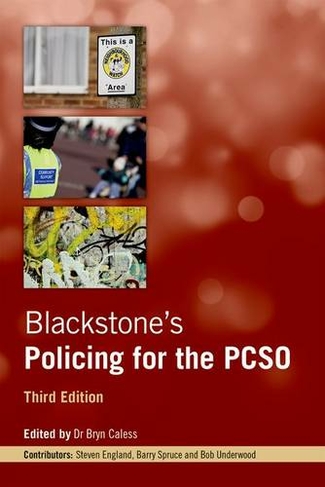 Blackstone's Policing for the PCSO is the third edition of the bestselling Blackstone's PCSO Handbook, representing the changing needs of this unique group within the police service. Providing up-to-date and comprehensive coverage of the role and functions of Police Community Support Officers (PCSOs), this revised format offers a more effective and practical resource covering all the elements of PCSO training nationally. With clear explanations of powers and procedures, the third edition has been updated to reflect the evolution of the PCSO's role within the police family since its inception over 10 years ago. It includes all the information that you will need in your PCSO career: from application, interview, and admission checks, through to joining a police force, embarking on training, and working in the field with Community Policing Teams. Featuring updated key National Occupational Standards for PCSOs, it also contains all the required learning outcomes for the wider police learning and development programme and covers areas from crime scenes and gathering evidence, to decision making and community engagement. Throughout, case scenarios, flow charts, and checklists illustrate and clarify key areas of procedure, and knowledge check sections help you improve your understanding and monitor your progress. Additionally, reference and definition boxes provide handy and accessible refreshers about the law and powers available to PCSOs. Written by highly-experienced practitioners alongside recently-appointed Police Community Support Officers, this is the only book a PCSO will need, wherever you are deployed, as well as being an invaluable aid to PCSO trainers and police tutors alike.

Dr Bryn Caless is Senior Lecturer in Policing at Canterbury Christ Church University and author of, or contributor to, a number of Blackstone's texts, including on police practice and PCSOs. After an active military career, Bryn was appointed Head of HR for Kent Police and Director of the Kent Police College, where he served for eight years before returning to academic work and researching the roles and opinions of chief police officers in UK and in Europe. He iseditor of Blackstone's Policing for the Special Constable and a contributor to Blackstone's Police Operational Handbook: Practice and Procedure. He is currently researching Police and Crime Commissioners with Barry Spruce.Barry Spruce is the Head of Partnerships at Kent Police, which includes the Special Constabulary and he has co-authored a number of Blackstone's texts, including Blackstone's Policing for the Special Constable. Barry is currently studying for a PhD in Criminology at Canterbury Christ Church University, focusing on the extended policing family and the voluntary sector, and researching PCCs with Bryn Caless.Robert (Bob) Underwood is Programme Director in Policing in the Department of Law and Criminal Justice Studies at Canterbury Christ Church University and a former Kent Police officer. Together with colleagues from both organizations he was responsible for the design of the Foundation Degree in Policing which formed the basis of initial police training and education in Kent. He contributes to several other books in the Blackstone's series, including Blackstone's Handbook for PolicingStudents, Blackstone's Police Operational Handbook: Practice and Procedure, and Blackstone's Policing for the Special Constable.Steven England is a serving PCSO with Kent Police, following a distinguished undergraduate career at Canterbury Christ Church University when he won the Ruxton Prize for Outstanding Student, a distinction he repeated on his PCSO training.