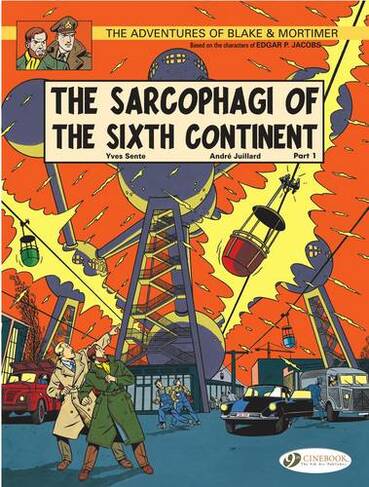 Blake & Mortimer 9 - The Sarcophagi of the Sixth Continent Pt 1

By Yves Sente (Author)
Paperback
£6.55 rrp £7.99 Save £1.44 (18%)
GBP
Availability
In Stock
Free Delivery Available When You Spend £25 Or More
Details
Spend £25 On Products To Receive Free Standard Delivery To Your Home Or Free Next Day Click and Collect To Stores
Share

Philip Mortimer spent his youth in the land of the Maharajas. He loves India, but his last visit there did not end well. Now, many years later, the famous Professor Mortimer is in charge of the British pavilion at the Brussels Universal Exposition. When strange phenomena begin disrupting preparations, Mortimer and his friend Blake set off on a trail that will take them to the sixth continent-to confront an old and unexpected enemy. chiefly col. Illustrations

Andre Juillard is a celebrated artist with a career spanning more than 35 years. He has worked on famous series such as Les Sept Vies de L'EpervierA" and MasquerougeA" and obtained the Grand Prix at the Angouleme festival in 1996. Yves Sente began writing scenarios in 1999 and has already acquired considerable clout, being chosen as successor to Van Hamme for the series ThorgalA" and the sequel to XIIIA" and working with Van Hamme on Blake & Mortimer.A"