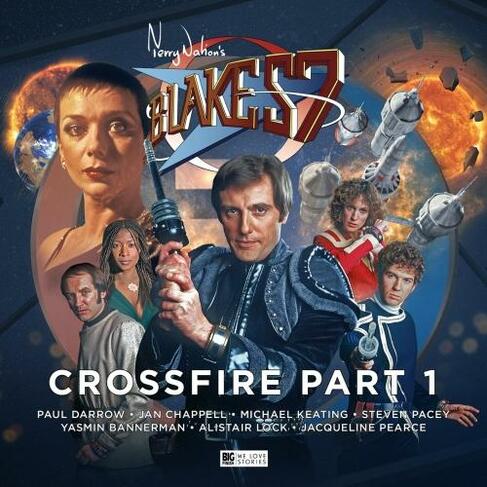 Four new brand-new full-cast Blake's 7 adventures set during the TV series' third season. 1 Paradise Lost by Steve Lyons. Erewhon was a legendary vacation planet - until it was ravaged by acid storms. A new friend brings the Liberator crew here, their objective: to assassinate an old enemy. But what they find beneath Erewhon's surface will plunge the galaxy into turmoil. 2 True Believers by Simon Clark. A mysterious voice forces Cally to a barren world where barbarians threaten a beleaguered city. There, Cally joins a dangerous quest to the Singing Grave, encountering evil of immense ferocity and power. 3. Resurgence by Mark Wright. A distress signal lures the Liberator to an uncharted world, where the ship's systems come under attack from an outside influence. Avon and the crew face a spectre of the past that could destroy their hopes for the future. 4 Fearless by David Bryher. A criminal scheme threatens the balance of power in the Federation, and Vila's skills offer the best hope of containing the chaos. Bolstered by Cally's telepathy, he leaps into action - but when Servalan arrives on the scene, the situation quickly spirals out of control... Blake's 7 proves to be one of Big Finish's most popular ranges, with fans of the original late 1970s BBC1 series enjoying many of the TV actors returning to their roles. This set comprises the first four tales in a fourth series of full-cast Blake's 7 adventures from Big Finish, accompanying three complete series of full-cast adventures, and the award-winning range of Blake's 7 - Liberator Chronicles volumes. The stories are set within the third BBC TV series, as Paul Darrow's Avon begins to cement his place as the leader of the anti-heroes on their stolen alien ship. Yasmin Bannerman (Doctor Who, Merseybeat) has been cast as Dayna Mellanby, a character originally played by Josette Simon. CAST: Paul Darrow (Kerr Avon), Michael Keating (Vila Restal), Jan Chappell (Cally), Steven Pacey (Del Tarrant), Yasmin Bannerman (Dayna Mellanby), Alistair Lock (Zen/Orac), Jacqueline Pearce (Servalan), Clare Vousden (Winterhaven), John Green (Mordekain), Hugh Fraser (The President), Rebecca Grant (Gwen Parker), Walles Hamonde (Gunner Kalvert), Becky Wright (Goddess / Distributor / Curator), Abi Harris (Alta-Six), Donovan Christian-Carey (Herrick), Rebecca Crankshaw (Zeera Vos), Daniel Collard (Jallen).