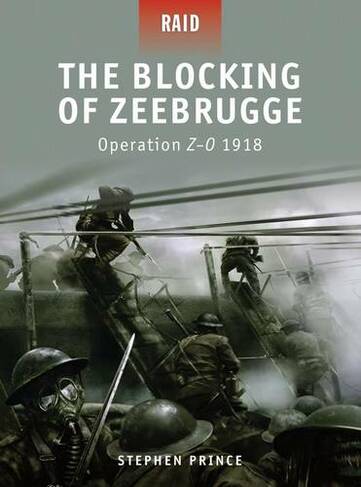 By Stephen Prince (Author), Guiseppe Rava (Illustrator)
Paperback
https://www.whsmith.co.uk/products/blocking-of-zeebrugge--operation-zo-1918-raid-no-7/stephen-prince/guiseppe-rava/paperback/9781846034534-01-000.html £12.87 rrp £13.99 Save £1.12 (8%)
GBP
Availability
Currently unavailable. We don't know when or if this item will be back in stock
Free Saver Delivery on orders over £20
Details
FREE SHIPPING over £20 for Saver Delivery
Share

On the night of 22-23 April 1918 the Royal Navy carried out a raid on the German held ports of Zeebrugge and Ostend - Operation Z-O. Under the cover of clouds and smoke, over 70 ships and an assault force of 1,800 Royal Marines embarked on a daring mission which involved a vicious battle of incredible intensity. However, despite the gallant and courageous efforts of the attackers, 11 of whom were later awarded the Victoria Cross, the raid was only partly successful. Discover the successes and failures of this dramatic raid in this in-depth account, complete with specially commissioned battlescene artwork. The author reveals how despite failure, the raid demonstrated to Germany that Britain was still capable of offensive action, even as its armies were being forced back. Illustrations (some col.)

Stephen Prince is a Historian in the Naval Historical Branch of the Royal Navy's Naval Staff. He is responsible for RN reporting from current operations and the historical input into current policy. He is a graduate of Warwick University and King's College London, where he received the Russell Prize. He has been Sir Robert Menzies Scholar at the Australian War Memorial, lecturer at Britannia Royal Naval College and senior lecturer at the Joint Services Command & Staff College. In 2006 he served in Afghanistan as War Diarist for the International Security Assistance Force (ISAF). His publications include articles in the Journal of Strategic Studies, the RUSI Journal & Defence Analysis. Stephen has led a number of tours to Zeebrugge for the Royal Marines. The author lives in Portsmouth, England.