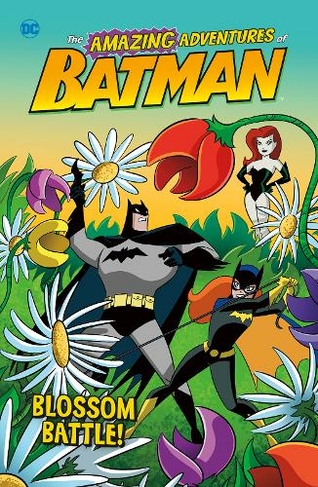 When monster plants grow out of control, Batman and Batgirl race to rescue Poison Ivy from a . . . Blossom Battle! Will the heroes save the day? Find out in this action-packed chapter book for young readers.

Laurie Sutton has read comics since she was a kid. She grew up to become an editor for Marvel, DC Comics, Starblaze, and Tekno Comics. She has written Adam Strange for DC, Star Trek: Voyager for Marvel, plus Star Trek: Deep Space Nine and Witch Hunter for Malibu Comics. There are long boxes of comics in her closet where there should be clothing and shoes. Laurie has lived all over the world, and currently resides in Florida. Dario Brizuela was born in Buenos Aires, Argentina, and as a teen he began studying in an art school-doing drawing, sculpture, painting, and more. After discovering superhero comic books, his goal was draw his favorite characters. He broke into comics by working for publishers like Dark Horse Comics, Image, Mirage Studios, IDW, Titan publishing, Soleil Productions, Viz Media, Little, Brown and Company, DC Comics, and Marvel Comics, and for companies like Hasbro and Lego. His comic book and illustration work in the U.S. and Europe includes: Star Wars Tales, Dioramas, Ben 10, Super Friends, Justice League Unlimited, Voltron Force, Batman: The Brave and the Bold, Transfomers, Mini Hulks, Gormiti, Superhero Squad, Scooby Doo, and Beware The Batman.