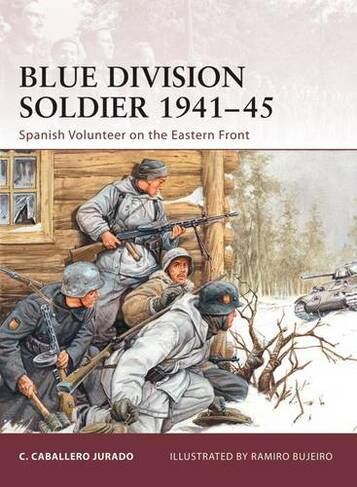 The all-volunteer 'Blue Division' was a formation that allowed Franco's technically neutral Spain to support Nazi Germany's invasion of Russia. Following initial training in Germany, the Blue Division's units were sent to the Eastern Front in August 1941, where, after a 40-day march to the front, the Division fought in several major actions including Leningrad. In 1943, with the tide turning against the Axis forces in Russia, the Division was ordered to be withdrawn, yet many men chose to stay on and serve with the Volunteer Legion. Even after the collapse in the East, some volunteered to serve with Waffen-SS units through to the fall of Berlin in 1945. This book narrates the experiences of the common soldier, exploring his motivation for serving the Wehrmacht, and detailing his dramatic experiences in a brutal and hostile theater of World War II. Illustrations (some col.)

Carlos Caballero Jurado was born in Ciudad Real, Spain, in 1957. He served as an NCO in the Spanish Army's Division Brunete (1st Armoured Division); and later graduated with a BA in History from the University of Alicante. He has written and co-written four Osprey titles; he is also the author of fourteen other books and numerous articles on military historical subjects, and his work has been translated into English and German. A history teacher in Alicante, he enjoys travel in Africa, Asia and Latin America, and is a keen climber and skier. The author lives in Alicante, Spain.