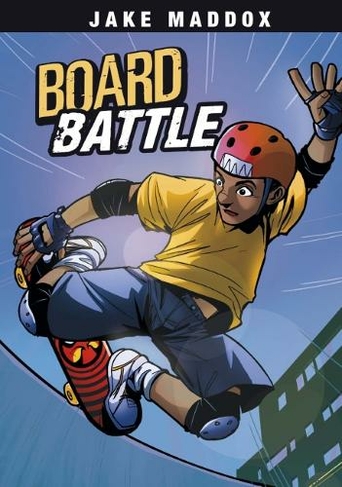 When a group of bullies decide they own the local skatepark, Conner and his best friend, Hannah, are forced to practise elsewhere. Conner and Hannah have to outsmart the bullies if they want to practise for the upcoming competition. Because in the end, the fight for the skatepark will come down to the ultimate battle of the boards.

Eric Stevens lives in St. Paul, Minnesota. He is studying to become a middle-school English teacher. Some of his favorite things include pizza, playing video games, watching cooking shows on TV, riding his bike, and trying new restaurants. Some of his least favorite things include olives and shoveling snow. Aburtov has worked in the comic book industry for more than 11 years. In that time, he has illustrated popular characters like Wolverine, Iron Man, Blade, and the Punisher. Recently, Aburtov started his own illustration studio called Graphikslava. He lives in Monterrey, Mexico, with his daughter, Ilka, and his beloved wife. Aburtov enjoys spending his spare time with family and friends.