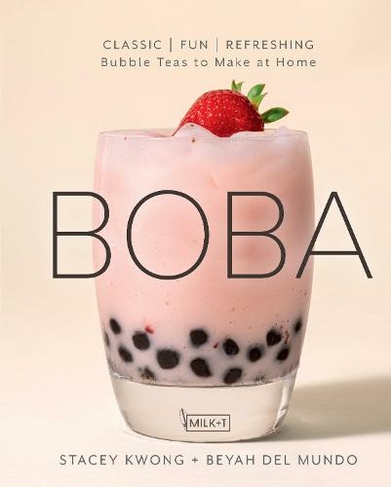 In Boba, the founders of MILK+T show you how to make classic, fun, and refreshing bubble teas at home, using all-natural ingredients. No matter if you call it boba or bubble tea, this addictive drink that originated in Taiwan in the 1980s has taken the world by storm, with shops popping up on every corner and lines out all their doors. Boba covers all the basics, from brewing tea and making homemade tapioca balls (aka boba) to handcrafting sweeteners, syrups, toppings, and more. Learn how to make: Milk Teas (Thai, black milk, and green milk teas) Fruit Teas (strawberry, mango, watermelon, kiwi, pineapple, pomelo, and cucumber teas) Specialty Drinks (strawberry coconut milk, almond butter milk tea, taro and ube almond milk, Sip 'N' Dips made with ice cream, and more) With over 50 easy-to-follow recipes and mouthwatering photos, along with the MILK+T story-from the world's first self-serve boba truck to three successful shops-and a dash of entrepreneurial girl power, Boba is the ultimate guide to this global phenomenon. 50 color photos

Stacey Kwong was born and raised in Los Angeles, California, to immigrant Chinese parents. From reselling phones in high school, to starting a failed clothing line in college, it was as if she was wired to start her own business. But growing up queer in a strict Asian American household, with less than stellar report cards, she struggled to find her passion. She and her business partner found success through boba, with MILK+T, a Los Angeles-based food-truck concept, featuring the first self-serve boba bar on wheels. With tens of thousands of delicious, high-quality drinks sold, MILK+T proudly grew to three owned-and-operated stores in Los Angeles, California, Portland, Oregon, and Las Vegas, Nevada.Beyah del Mundo was born and raised in Manila, Philippines, to Filipino and Chinese parents, and moved to Los Angeles, California, in 2003. As a native Filipino, entrepreneurship skills were ingrained in her head as the only means of survival, never as a career choice. In adulthood, Beyah was able to overcome adversity by thinking outside the box. Instead of complaining about her immigration disadvantages, she decided to outwork everyone. In 2015, she received a partnership opportunity to start MILK+T, a self-serve boba-bar concept that soon would prove to change the way the world gets #BOBAWASTED.