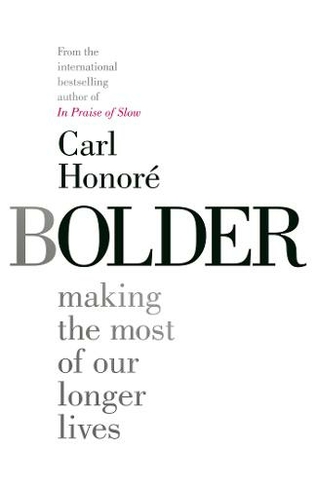 Bolder RADIO 4 BOOK OF THE WEEK

By Carl Honore (Author)
Hardback
https://www.whsmith.co.uk/products/bolder-radio-4-book-of-the-week/carl-honore/hardback/9781471164354-12-000.html £13.59 rrp £16.99 Save £3.40 (20%)
GBP
Availability
In Stock
Free Delivery Available When You Spend £25 Or More
Details
Spend £25 on eligible products to receive free standard delivery to home or free next working day click and collect to store
Share

* BBC RADIO 4 BOOK OF THE WEEK * 'A joyously life-enhancing book [that] shatters the myths about ageing' Daily Mail Carl Honore captured the zeitgeist with his international sensation, In Praise of Slow. In Bolder, he introduces us to another rising movement: a revolution in our approach to ageing. Ageing is inevitable. In this time of longer lifespans, however, we have the potential to age better than ever before. Having travelled the globe to meet the pioneers who are redefining ageing, Carl Honore explores the cultural, medical and technological trends that will help us make the most of our longer lives. He shows us that the time has come to cast off prejudices and blur the lines of what is possible at every age. We can tear up the old script that locks us into learning in early life, working in the middle years and pursuing leisure with whatever time is left at the end. Instead, we can learn, work, rest, care for others, volunteer, create and have fun all the way through our lives. Bolder is a radical re-think of our approach to everything from education, healthcare and work, to design, relationships and politics. An essential and inspiring read to help all of us make ageing a bonus rather than a burden.

Carl Honore is an award-winning writer and broadcaster. His first book, In Praise of Slow, examined our compulsion to hurry and chronicled a global trend towards putting on the brakes. He is also the author of Under Pressure and The Slow Fix. Translated into more than thirty languages, his books have landed on bestseller lists in many countries. He presented a TV show called Frantic Family Rescue on Australia's ABC and currently hosts a podcast called The Slow Revolution. His TED talk has been viewed over 2.7 million times. He lives with his family in south-west London.