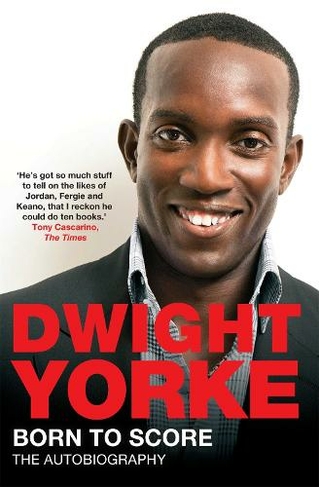 Born to Score The Autobiography

Dwight Yorke has been one of the most successful and prolific goalscorers in the Premier League's history over the past decade. He was known first at Aston Villa and then Manchester United for his permanent smile, smoothness and flair - and for making headlines both on and off the pitch. He was a key member of Manchester United's treble-winning 1999 season and formed a deadly strike parterships with Andy Cole. His subsequent clubs have been Blackburn Rovers, Birmingham City, Sydney FC and Sunderland. Yorke came to be seen as the epitome of a young, successful, rich lifestyle, and he makes no apology for doing what a lot of young, single men would have done with sporting prowess, adulation and money. But it was his relationship with Katie Price (Jordan) among others which propelled him onto the gossip pages. He's the father of their son Harvey, and he talks for the first time about the hurt of being branded a bad dad who didn't care. Having never spoken out before, Dwight, nearing retirement, wants to tell his side, and from the heart. It's the story of a boy who followed his football dreams from Tobago's white beaches to England's lush stadia and who, having been given a miraculous second chance to live aged two, risked losing everything he held dear. This is his fascinating story.

Dwight Yorke is one of the Premiership's leading goalscorers with 127 goals. Born in Canaan, Tobago in 1971, he found success at Aston Villa and then Manchester United where he was part of the 1999 Treble winning side. In 2006 he led Trinidad and Tobago to the nation's first ever World Cup finals at Germany 2006.