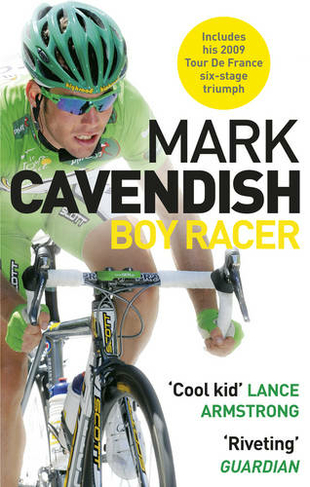 Boy Racer steps behind the scenes of the Tour de France. It unmasks the exotic, contradictory, hysterical and brutal world of professional cycling from the compellingly candid viewpoint of someone right in the thick of it. Written off as 'fat' and 'useless' in his youth, Mark Cavendish is now one of cycling's brightest stars and one of Britain's greatest ever cyclists. Some have called him cocky, but to anyone who doesn't like his style, Mark will simply shrug his shoulders and reply, 'I know I'm good. There's no point lying about it.' Peers say that they have never seen anyone with Cavendish's hunger for success and while this fearlessness - both in the saddle and on the record - has at times led to controversy, it has also earned him the respect of ever more fans. In Boy Racer we follow him through the mayhem of the Tour de France in a page-turning journey of pure exhilaration.

Born and raised on the Isle of Man, Mark Cavendish became a world track champion as a teenager in 2005, a Commonwealth Games gold medallist a year later and in 2008 regained his world title in partnership with Bradley Wiggins. Having now switched his focus to the more glamourous world of road cycling, Mark is widely regarded as the most exciting and charismatic young rider to grace the sport in years, a status he confirmed with his fantastic record-breaking performance in the 2009 Tour de France. Mark rides for Team Columbia and lives on the Isle of Man.