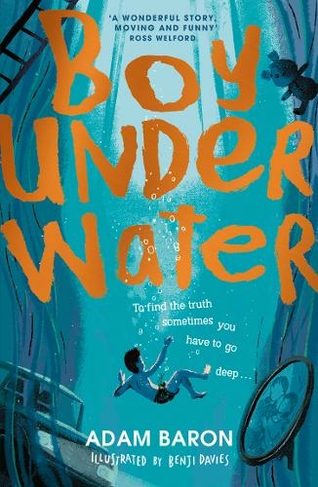 By Adam Baron (Author)
Paperback
https://www.whsmith.co.uk/products/boy-underwater/adam-baron/paperback/9780008267018-12-000.html £5.94 rrp £6.99 Save £1.05 (15%)
GBP
Availability
In Stock
Free Delivery Available When You Spend £25 Or More
Details
Spend £25 On Products To Receive Free Standard Delivery To Your Home Or Free Next Working Day Click And Collect To Store

SELECTED AS WATERSTONES BOOK OF THE MONTH SHORTLISTED FOR THE CARNEGIE AWARD A heart-breaking, heart-warming novel for everyone of 10 and older - this book will probably make you cry, and will definitely make you laugh. Cymbeline Igloo (yes, really!) has NEVER been swimming Not ever. Not once. But how hard can it be? He's Googled front crawl and he's found his dad's old pair of trunks. He's totally ready. What he's not ready for is the accident at the pool - or how it leads his mum to a sudden breakdown. Now, with the help of friends old and new, Cymbeline must solve the mystery of why his mum never took him near water - and it will turn his whole life upside down... 'A wonderful story, moving and funny' - Ross Welford

Adam Baron is the author of five successful novels and has, in his time, been an actor, comedian, journalist and press officer at Channel 4 television (as well as things he's too embarrassed to mention). He now runs the widely respected MA in Creative Writing at Kingston University London. Adam lives in Greenwich, South London, with his wife and three young children. He wrote Boy Underwater (his first novel aimed at younger readers) because they told him to. While still in the flush of youth he knows what his final words are going to be: 'clear the table'.