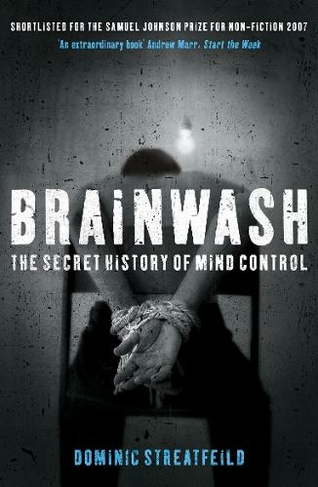 By Dominic Streatfeild (Author)
Paperback
£10.65 rrp £12.99 Save £2.34 (18%)
GBP
Availability
In Stock
Free Delivery Available When You Spend £15 Or More
Details
Spend £15 On Products To Receive Free Standard Delivery To Your Home Or Free Next Day Click and Collect To Stores
Share

- What would it take to turn YOU into a suicide bomber? - Do heavy metal LPs contain subliminal messages? - What was MI6 doing with LSD in the 1950s? - Does the Unification Church brainwash recruits? - Is The Manchurian Candidate fact or fiction? - Is it possible to erase memories, or to implant them artificially? - How would YOU interrogate a member of Al Qaeda? With access to formerly classified documentation and interviewees from MI5, MI6, the CIA, the US Army and British Intelligence Corps, BRAINWASH traces the evolution of the world's most secret psychological procedure, from its origins in the Cold War to the height of today's war on terror. n/a

Dominic Streatfeild is a writer and documentary maker who specialises in military and security issues. His television work includes BBC2's Exocet - detailing MI6 and the SAS's clandestine war for the Falkland Islands and exposing the real reasons for the loss of HMS Sheffield - and the Discovery Channel's series Age of Terror, examining the roots of political violence. Airing in over 100 countries, Age of Terror included interviews with members of 18 terrorist groups including FARC, the IRA, The Shining Path and Hezbollah. The series won a British Broadcast Award in 2003. He is the author of Cocaine, which The Sunday Times called 'a definitive history'.