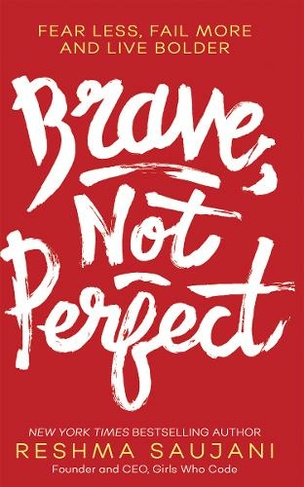 By Reshma Saujani (Author)
Hardback
https://www.whsmith.co.uk/products/brave-not-perfect/reshma-saujani/hardback/9780008249526-12-000.html £13.59 rrp £16.99 Save £3.40 (20%)
GBP
Availability
In Stock
Free Delivery Available When You Spend £25 Or More
Details
Spend £25 On Products To Receive Free Standard Delivery To Your Home Or Free Next Working Day Click And Collect To Store
Share

The new Lean In, from the multi-award-winning Founder and CEO of national non-profit Girls Who Code and New York Times bestselling author Reshma Saujani. 'We are raising our boys to be brave, but our girls to be perfect. And this is holding us back.' Imagine if you lived without the fear of failure, without the fear of not measuring up. If you no longer felt the need to stifle your thoughts and swallow what you really want to say in order to please and appease others. If you could stop berating yourself mercilessly for human mistakes, let go of the guilt and the strangling pressure to be perfect, and just breathe. What if, in every decision you faced, you made the brave choice or took the bolder path. Would you be happier? Would you impact the world in the ways you dream you can? I believe the answer to both is yes.

Reshma, hasn't just climbed the corporate ladder step-by-step, she has a fantastic personal story that will attract serious PR coverage: the daughter of immigrant parents, a Yale Law school graduate, landing in a top-5 law firm before quitting her job and becoming the first Indian-American woman to run for Congress in what was touted as a hotly-contested race where she was endorsed by the New York Observer and the Daily News and featured on the cover of the New York Times and the Washington Post. She then lost spectacularly, picked herself up and went on to found Girls Who Code in 2012. All before she was 40.