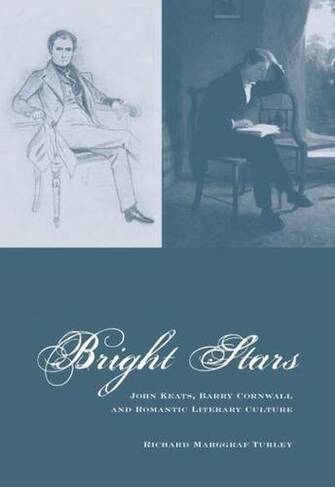 By Richard Marggraf-Turley (Author)
Paperback
https://www.whsmith.co.uk/products/bright-stars-john-keats-barry-cornwall-and-romantic-literary-culture-57/richard-marggrafturley/paperback/9781846318139-01-000.html £16.99
GBP
Availability
Currently unavailable. We don't know when or if this item will be back in stock
Share

If we could ask a Romantic reader of new poetry in 1820 to identify the most celebrated poet of the day after Byron, the chances are that he or she would reply with the name of 'Barry Cornwall'. Solicitor, dandy and pugilist, Cornwall - pseudonym of Bryan Waller Procter (1787-1874) - published his first poems in the Literary Gazette in late 1817. By February 1820, under the tutelage of Keats's mentor, Leigh Hunt, Cornwall had produced three volumes of verse. Marcian Colonna sold 700 copies in a single morning, a figure exceeding Keats's lifetime sales. Hazlitt's suppressed anthology, Select British Poets (1824), allocated Cornwall nine pages - the same number as Keats, and more than Southey, Lamb or Shelley; Blackwood's Edinburgh Magazine pronounced Cornwall a poet of 'originality and genius'; and in 1821, Gold's London Magazine announced that in terms of 'tenderness and delicacy' even Percy Shelley was 'surpassed very far indeed by Barry Cornwall'. It is difficult to square Cornwall's early nineteenth-century popularity with his subsequent neglect. In Bright Stars Richard Marggraf Turley concentrates on Cornwall's phenomenonal success between 1817 and 1823, emphatically returning an important and unjustly neglected Romantic author to critical focus. Marggraf Turley explores Cornwall's rivalry - and at various junctures, political camaraderie - with fellow Hunt protege Keats, whose career exists in a fascinatingly mirrored relationship with his own trajectory into celebrity. The book argues that Cornwall helped to structure Keats's experience as a poet but also explores the central question of how Cornwall's racy and politically subversive poetry managed to establish a broad readership where Keats's similarly indecorous publications met with review hostility and readerly indifference.