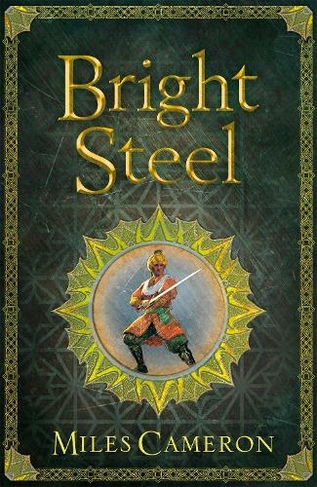 By Miles Cameron (Author)
Paperback
https://www.whsmith.co.uk/products/bright-steel-masters-and-mages-book-three-masters-and-mages/miles-cameron/paperback/9781473217751-12-000.html £8.19 rrp £9.99 Save £1.80 (18%)
GBP
Availability
In Stock
Free Delivery Available When You Spend £25 Or More
Details
Spend £25 on eligible products to receive free standard delivery to home or free next working day click and collect to store
Share

Every war come down to the flash of bright steel. Even when the air is full of magic . . . Aranthur and his friends have come together across different continents and realms with one purpose: to strike back against the forces which have torn a hole in the heavens and threaten to tear the world beneath them apart as well. With time running short, and treason at home, there are battles to be fought on the field, in the magical arena, and in the ever-deadly realm of politics, and they cannot fail anywhere or everything will fall. Victory will require enemies to trust one another, old foes to fight together, spies to reveal the truth and steadfast allies to betray long-corrupt rulers. Is Aranthur, a twenty-year-old student, really the master strategist to bring it all together?And can he and his friends build enough trust to overcome aeons of lies when their plans inevitably fall to pieces? Do they even know, for sure, who the enemy is . . . ? Praise for Miles Cameron 'A masterclass in how to write modern fantasy . . . Miles Cameron is at the top of his game' John Gwynne 'A fresh take on the typical farm boy turned hero fantasy, this is everything you could possibly want in a fantasy series' The Bibliophile Chronicles 'A stirring, gritty and at times quite brutal epic fantasy' Tor.com 'This series promises to be the standout epic fantasy for the ages' Fantasy Book Critic

Miles Cameron is a fantasy novelist who currently lives in Toronto, Canada. He is a military veteran and has a degree in Medieval History. His debut novel (The Red Knight), first in The Traitor Son novels, was one of the most acclaimed fantasy debuts of 2012 and nominated for the David Gemmell Morningstar award. It is followed by The Fell Sword, published in 2014.He also writes highly acclaimed historical fiction under the name Christian Cameron.You can learn more at www.christiancameronauthor.com, or by following @Phokion1 on twitter.