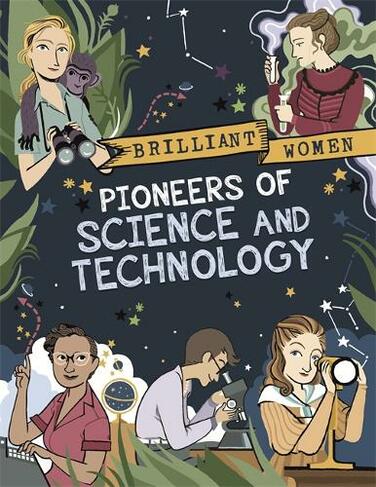 In Pioneers of Science and Technology you'll say hello to Hypatia, an ancient Greek mathematician and astronomer. You'll learn about Lise Meitner, the heroic Jewish physicist who escaped the Nazis. You'll join Jane Goodall who lived in the jungle studying apes. These women are just a few of the many who followed their passion for science and technology, and weren't put off by people telling them they couldn't or shouldn't. And along the way they discovered radiation, wrote the first computer program, expanded our knowledge of the universe and flew into space. Curious, provocative, engaging, brave, and funny - women who change the world are diverse, intriguing and brilliant. Created by an all-women team and filled with wonderful illustrations, and engaging activities that will nurture your own varied skills, the Brilliant Women series compiles the stories of inspiring women from every field. Retelling their triumphs and adversities, this beautiful series of four books reveals and celebrates the women who have shaped the world we live in now. Perfect reading for the next generation of brilliant girls and boys. Suitable for readers aged 9 and up.

Georgia Amson-Bradshaw is a children's writer and editor who lives in Brighton, East Sussex. She has worked on a number of high-profile and award-winning science books for kids, including the Royal Society Young People's Book Prize winner Eye Benders, and the London Science Museum activity book This Book Thinks You're a Scientist. She remembers the eye-opening and inspiring effect her favourite books had on her as a child, and so takes her responsibility to pass that interest and excitement on very seriously! Rita Petruccioli was born in Rome in 1982. She attended the Accademia di Belle Arti in Rome and ENSAD in Paris. Her works have been exhibited in Italy, France, Germany and South Korea. She works as an illustrator and comic book artist for different projects including advertising, magazines, textile design and children books. She has collaborated with different publishers such as Mondadori, Bao Publishing, Einaudi, Ladybird, Timbuktu Lab, Auzou, ELI, Lavieri, La Nuova Frontiera Junior, Il Castoro and Laterza. When she is not drawing she is engaged in workshops on gender stereotypes in comics.