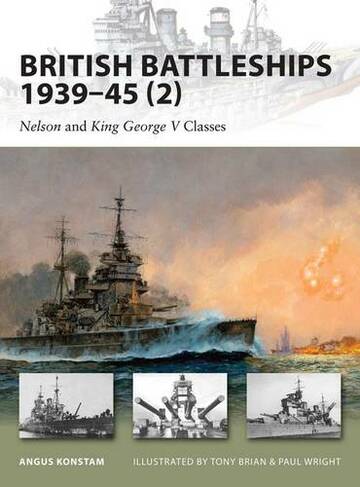 With the outbreak of World War II, Britain's Royal Navy and her fleet of battleships would be at the forefront of her defence. Yet ten of the twelve battleships were already over twenty years old, having served in World War I, and required extensive modifications to allow them to perform a vital service throughout the six long years of conflict. This title offers a comprehensive review of the seven battleships of the Nelson and King George V classes from their initial commissioning to their peacetime modifications and wartime service. Moreover, with specially commissioned artwork and a dramatic re-telling of key battles, such as the duel between the Bismark and HMS Rodney, this book will highlight what it was like on board for the sailors who risked their lives on the high seas. Illustrations (some col.)

Angus Konstam is one of Osprey's most prolific authors, with over 30 published titles. He has also written more than 25 larger books for other publishers. His Osprey titles include British Battlecruisers 1939-45, British Motor Torpedo Boats 1939-45 (both in the New Vanguard Series), and a string of other nautical titles. His other works include Hunt the Bismark (Naval Institute Press, 2003), PT Boats (Ian Allen, 2005) and Warships (PRC, 2001). He has also written a 100 edition part-work series on Naval History for Osprey/Del Prado. His latest book is Blackbeard: America's Most Notorious Pirate (Wiley, 2006). A former naval officer, maritime archaeologist and maritime museum curator, Angus has a long and passionate love affair with the sea, maritime history and warships. For more details visit the author's website at www.anguskonstam.com The author lives in Edinburgh, Scotland.