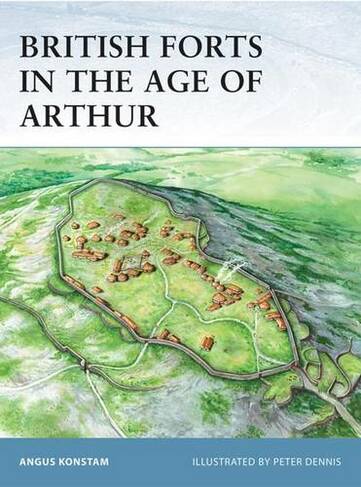 British Forts in the Age of Arthur: (Fortress No. 80)

By Angus Konstam (Author), Peter Dennis (Illustrator)
Paperback
https://www.whsmith.co.uk/products/british-forts-in-the-age-of-arthur-fortress-no-80/angus-konstam/peter-dennis/paperback/9781846033629-01-000.html £11.95 rrp £12.99 Save £1.04 (8%)
GBP
Availability
Currently unavailable. We don't know when or if this item will be back in stock
Free Saver Delivery on orders over £20
Details
FREE SHIPPING over £20 for Saver Delivery
Share

When the Romans left Britain around AD 410, the unconquered native peoples of modern Scotland, Ireland and Wales were presented with the opportunity to pillage what remained of Roman Britain. The Post-Roman Britons did their best to defend themselves by using fortifications. While some Roman forts were maintained, the Post-Roman Britons also created new strongholds, or re-occupied some of the hill-forts first built by their ancestors. The most famous warlord of the 'Dark Ages' was the legendary Arthur. His attempt to unite the Britons in the face of Saxon invaders was doomed, and in a little over two centuries the country had become Saxon England. However, for a few brief decades, 'Arthur of the Britons' did what he could to safeguard the culture and civilisation of Post-Roman Celtic Britain. Illustrations

Angus Konstam hails from the Orkney Islands, and is the author of over 50 books, 30 of which are published by Osprey. This acclaimed and widely published author has written several books on piracy, including The History of Pirates. His most recent work is a full-length piratical biography: Blackbeard: America's Most Notorious Pirate. A former naval officer and museum professional, he worked as the Curator of Weapons at the Tower of London and as the Chief Curator of the Mel Fisher Maritime Museum in Key West, Florida. He now works as a full-time author and historian. The author lives in Edinburgh, Scotland.