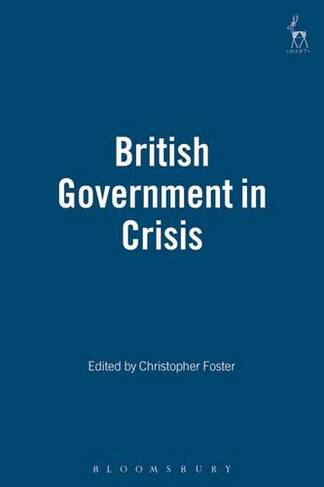 Why are we badly governed? Why has a system of government - the envy of the world as recently as the 1970s - developed so many defects? Why is there such a gulf between political classes, who seem to believe the position satisfactory or inevitable, and the general public, increasingly disaffected by politics and government? This book argues that the defects are not attributable to one political party. Some factors are outside politicians' control: the globalization of economic activity; the changes in international politics after the end of Soviet Russia; the adverse consequences of more dominating and competitive media. Some other factors are widely recognized: the decline of the cabinet and the marginalizing of Parliament; the influence of spin on our political culture; the increased role of political and special advisers. But others are not as well understood. Among them are the decline in the authority of many ministers, the undermining of the constitutional position and consequent effectiveness of the civil service, the fragmentation of government and the public sector into a mass of bodies with complex but ill-defined relations between them, and the ramifying of a system of government which, despite its protestations, is less interested in delivering results than managing news. The book traces these developments, especially over the last 25 years, but most intensively since 1997. It looks to a major change in the ways of government. It doubts whether a change of prime minister or party would remove current defects. It considers other possible alternatives, particularly a constitutional change to a 'presidential' system of government, or the introduction of a legal constitution. It concludes by arguing that, although venturing in new and untried directions might seem attractive, improvement - radical improvement - of the system we have is more likely to achieve better government and restore public confidence. black & white illustrations

Sir Christopher Foster taught at Oxford and LSE before moving into the City where he advised government on transport and privatization. He has been on the board of the Post Office and Railtrack, and has worked for several government Commissions.