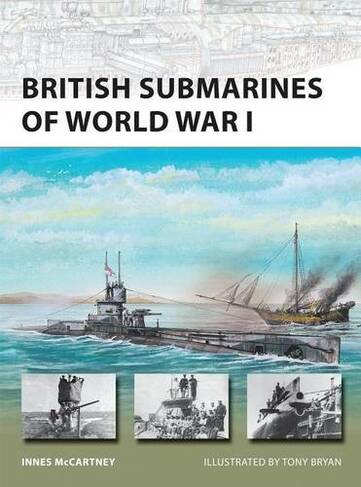 British Submarines of World War I: (New Vanguard No. 145)

As the major powers engaged in an arms race in the early years of the 20th century, the Admiralty was tasked with developing that deadly stalker of the high seas - the submarine. In 1905, briefed with creating a vessel that could be employed on an enemy's coastline, the Admiralty took several technological leaps forward to match the German revolutionary vessels. Several classes were launched but the most successful was the E-Class, which were built in 1914 and would prove to be the supreme British submarines of the war. In operations it was the most successful British submarine class in actions against enemy warships, which included the destruction of one battleship, three cruisers and five U-boats. Three E-Class commanders were to win the Victoria Cross - Britain's highest award for gallantry.Submarine operations were particularly successful in the Baltics. Here the British fleet could not operate safely - the waters were dangerous, heavily mined and there were no bases. However, for British submarines operating out of Russia this was a happy hunting ground. Although only a total of six were permanently stationed here, they did a disproportionately high amount of damage to the enemy than their more numerous counterparts in the North Sea. Ironically, another area of remarkable success was the Dardanelles which is generally associated with a colossal Allied loss. Despite the difficult conditions of enemy minefields, torpedoes and searchlights; British submarines valiantly attacked and harassed the Turkish supply effort.Another type of submarine - the K-Class - was developed purely for operations against Germany's rival U-boats. Playing a dangerous game of 'hunt the hunter', K-Class submarines were deployed in known U-boat transit routes, in their patrol areas and outside their bases. A total of thirteen U-boats were subsequently sunk in a year. Famously two British submarines succeeded in stalking and sinking two German U-boats within the English Channel proving the vital contribution submarines made to the Home Fleet. Discover the exceedingly dangerous world of early submarine warfare as the Admiralty, under intense pressure, developed a number of submarine classes to attack and harass rival navies both in home waters and abroad. 46

Innes McCartney is an historian and nautical archaeologist, specializing in 20th-century naval vessels. He lectures widely on a number of associated subjects. A passion for shipwrecks has led to some famous discoveries, including the submarine M1 and the battlecruiser HMS Indefatigable. His previous book, Lost Patrols detailed his uncovering the 121 submarines sunk in the English Channel. His own underwater photography illustrates this book. The author lives in Cornwall, UK.Tony Bryan is a freelance illustrator of many years' experience who lives and works in Dorset. He initially qualified in Engineering and worked for a number of years in Military Research and Development, and has a keen interest in military hardware - armor, small arms, aircraft and ships. Tony has produced many illustrations for partworks, magazines and books, including a number of titles in the New Vanguard series. Tony Bryan lives in Dorset, UK.