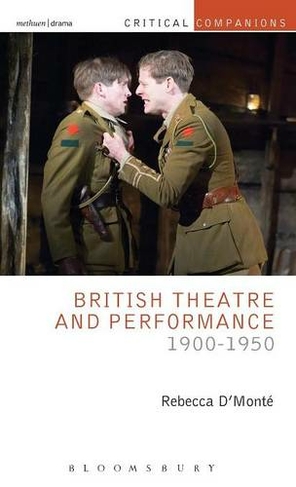 British theatre from 1900 to 1950 has been subject to radical re-evaluation with plays from the period setting theatres alight and gaining critical acclaim once again; this book explains why, presenting a comprehensive survey of the theatre and how it shaped the work that followed. Rebecca D'Monte examines how the emphasis upon the working class, 'angry' drama from the 1950s has led to the neglect of much of the century's earlier drama, positioning the book as part of the current debate about the relationship between war and culture, the middlebrow, and historiography. In a comprehensive survey of the period, the book considers: - the Edwardian theatre; - the theatre of the First World War, including propaganda and musicals; -the interwar years, the rise of commercial theatre and influence of Modernism; - the theatre of the Second World War and post-war period. Essays from leading scholars Penny Farfan, Steve Nicholson and Claire Cochrane give further critical perspectives on the period's theatre and demonstrate its relevance to the drama of today. For anyone studying 20th-century British Drama this will prove one of the foundational texts. 8 bw illus

Rebecca D'Monte is Senior Lecturer in Drama at the University of the West of England, Bristol, UK. Her publications include Cool Britannia? British Political Drama in the 1990s, co-edited with Graham Saunders.