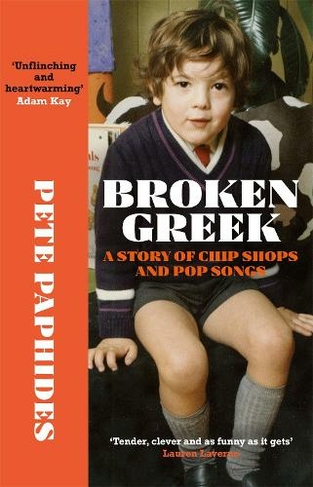 By Pete Paphides (Author)
Hardback
https://www.whsmith.co.uk/products/broken-greek/pete-paphides/hardback/9781529404432-12-000.html £16.00 rrp £20.00 Save £4.00 (20%)
GBP
Availability
In Stock
Free Delivery Available When You Spend £25 Or More
Details
Spend £25 on eligible products to receive free standard delivery to home or free next working day click and collect to store
Share

*AS READ ON BBC RADIO 4 'BOOK OF THE WEEK'* 'Lip-lickingly, dance-around-the-living-room good... A smash hit' Observer 'Unflinching and heartwarming' - Adam Kay 'Tender, clever and as funny as it gets ... a heart-piercing joy' - Lauren Laverne 'An exceptional coming-of-age story [...] Pete Paphides may very well have the biggest heart in Britain' - Marina Hyde 'I ADORE this utterly wonderful coming-of-age memoir. Joyful, clever, and a bit heartbreaking' - Nina Stibbe 'Heartfelt, hilarious and beautifully written, Broken Greek is a childhood memoir like no other' - Cathy Newman 'So wonderfully written, such a light touch. Drenched in sentiment yet not in the least sentimental' - John Niven 'It's brilliant. Sad, really funny and beautifully written ... just fantastic' - Alexis Petridis 'A truly beautiful book' - James O'Brien 'Intoxicating' - Kirsty Wark 'Oh, how I love Pete Paphides and this book' - Daniel Finkelstein 'A balm in these times' David Nicholls 'Fantastic ... Can't recommend it highly enough' Tim Burgess __________ 'Do you sometimes feel like the music you're hearing is explaining your life to you?' When Pete's parents moved from Cyprus to Birmingham in the 1960s in the hope of a better life, they had no money and only a little bit of English. They opened a fish-and-chip shop in Acocks Green. The Great Western Fish Bar is where Pete learned about coin-operated machines, male banter and Britishness. Shy and introverted, Pete stopped speaking from age 4 to 7, and found refuge instead in the bittersweet embrace of pop songs, thanks to Top of the Pops and Dial-A-Disc. From Brotherhood of Man to UB40, from ABBA to The Police, music provided the safety net he needed to protect him from the tensions of his home life. It also helped him navigate his way around the challenges surrounding school, friendships and phobias such as visits to the barber, standing near tall buildings and Rod Hull and Emu. With every passing year, his guilty secret became more horrifying to him: his parents were Greek, but all the things that excited him were British. And the engine of that realisation? 'Sugar Baby Love', 'Don't Go Breaking My Heart', 'Tragedy', 'Silly Games', 'Going Underground', 'Come On Eileen', and every other irresistibly thrilling chart hit blaring out of the chip shop radio. Never have the trials and tribulations of growing up and the human need for a sense of belonging been so heart-breakingly and humorously depicted. *Listen along with Pete's BROKEN GREEK playlist on Spotify!*

Pete Paphides started his career in music journalism at Melody Maker before going on to write for Time Out, the Guardian, Mojo, Q, Observer Music Monthly and The Times, where he spent five years as their Chief Rock Critic. He has made several documentaries for BBC Radio 4, including 'Lost Albums', 'Follow-Up Albums', 'The Songs of Molly Drake' and 'Good Grief: The Story of "Peanuts"'. He has been a regular contributor to BBC Four music documentaries and hosted two series of 'Vinyl Revival' for BBC 6 Music. Since 2015, he has hosted a weekly music show for Soho Radio and also runs his own record label, Needle Mythology. He is married to the writer and journalist Caitlin Moran. Broken Greek is his first book.