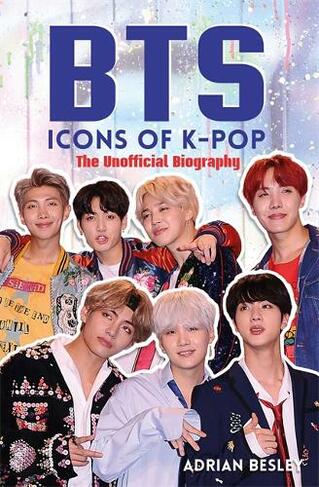 BTS is the breakthrough K-pop band. For the first time, this unofficial biography tells the story of the Korean boy band with a global army of fans, who have propelled their heroes to the top of the charts all over the world. Seven good-looking boys - RM, Jin, Suga, J-Hope, Jimin, V and Jungkook - who can dance as well as they can rap and sing, are tearing up the global music charts. Nothing new? Think again. BTS, who rose to fame in their native South Korea in 2013 and who sing almost entirely in Korean, are now a sensation in the US, the UK and the rest of the world. K-pop is a growing phenomenon in the West, and over the last few years, it has steadily gathered a huge global following. With their talent, dedication, good looks, fabulous choreography, and catchy blend of pop, hip hop and RnB, BTS are leading the advance. - BTS's latest album 'Love Yourself: Answer' went straight to #1 in the US charts, following the success of their previous album, 'Love Yourself: Tear', which was the first ever Korean album to achieve this - Over 17 million followers on Twitter - They have been profiled in US Vogue - the first K-pop band to be granted such an honour - The music video for IDOL broke YouTube streaming records, being viewed 46 million times in the first 24 hours; the view count is now in the hundreds of millions - They won the 2018 Billboard Music Award for 'Top Social Artist' for the second year in a row - Listed by Forbes as the most retweeted artist on Twitter in March 2016 - and their fanbase has ballooned since then - Named in Time magazine's 'Top 25 Most Influential People on the Internet 2017' list - Their 2018-2019 world tour sold out within minutes of tickets going on sale Extensively researched, and written in an upbeat and accessible style, this book interweaves the success stories of each of the boys with how the band got together, while documenting their amazing rise to fame in Southeast Asia, and then the world. It includes 16 pages of full colour photographs of the band playing live, posing and having fun. Also available: 9781780556017 BTS: Test Your Super-Fan Status 9781789291339 BTS and Me: Your Unofficial Fill-In Fan Book 16pp colour plates

After working as a copywriter at the BBC, Adrian Besley became a freelance writer. He has written many successful non-fiction titles, including the recent official Monty Python Hidden Secrets, which told the story of Monty Python through artefacts from the archives; boy band biography 5 Seconds of Summer Confidential; a series of top-selling YouTube books such as YouTube World Records; and various humour titles such as The Retrosexual Manual.