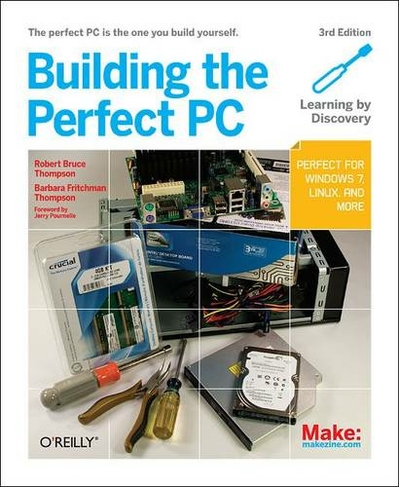 Want to build a PC that perfectly meets your needs? This up-to-date guide has precisely what you need to know. You A'll learn about PC fundamentals, how to plan your project using the latest components, where and how to buy the parts you need, and how to assemble everything with step-by-step instructions and clear, easy-to-follow images. You also get an insightful discussion on why you A'd want to build your own PC in the first place. Unlike big-brand computers that use lower-quality components so they can meet aggressive pricing targets, the PCs you A'll learn to build in this popular book call for high-quality parts that you can purchase directly or obtain through distributors and resellers. The latest edition includes these PC options: * Budget System -- build an inexpensive system that focuses on quality and reliability * Mainstream System -- roll your own fast, flexible, quiet general-purpose system * Extreme System -- build a wicked fast system optimized for video editing/production, Photoshop, gaming, or pure number-crunching * Media Center System -- centralize your music, DVDs, and home video with your HDTV as the display, and share your content with any PC in your home * Appliance System -- put together a tiny, quiet, inexpensive PC that you can tuck away anywhere * Home Server -- build your own secure repository to centralize data storage and sharing for every system in your home

Robert Bruce Thompson is a coauthor of Building the Perfect PC, Astronomy Hacks, and the Illustrated Guide to Astronomical Wonders. Thompson built his first computer in 1976 from discrete chips. It had 256 bytes of memory, used toggle switches and LEDs for I/O, ran at less than 1MHz, and had no operating system. Since then, he has bought, built, upgraded, and repaired hundreds of PCs for himself, employers, customers, friends, and clients. Robert spends most clear, moonless nights outdoors with his 10-inch Dobsonian reflector telescope, and is currently designing a larger, computerized, truss-tube Dobsonian that he plans to build. Barbara Fritchman Thompson is a coauthor of Building the Perfect PC, PC Hardware Buyer's Guide, Astronomy Hacks, and PC Hardware in a Nutshell. Barbara worked for 20 years as a librarian before starting her own home-based consulting practice, Research Solutions, and is also a researcher for the law firm Womble, Carlyle, Sandridge & Rice, PLLC. Barbara is an avid amateur astronomer.