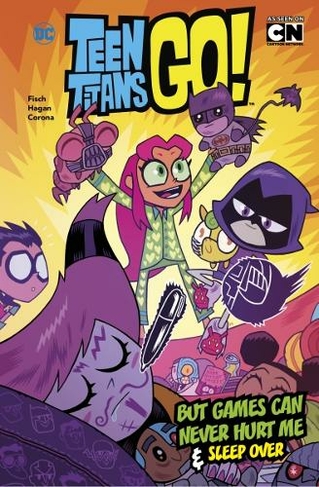 But Games Can Never Hurt Me and Sleep Over

What happens when Cyborg and Beast Boy plug their sweet new game console into the Tower's mainframe computer? It's mayhem! It's madness! It's . . . TOTALLY AWESOME! Then, what happens when the girls have a slumber party and don't invite any of the boys? Mayhem! Madness! Truth or Dare!

Bitten by a radioactive typewriter, Sholly Fisch has spent the wee hours writing books, comics, TV scripts, and online material for over 25 years. His comic book credits include more than 200 stories and features about characters such as Batman, Superman, Bugs Bunny, Daffy Duck, Spider-Man, and Ben 10. Currently, he writes stories for ACTION COMICS every month, plus stories for LOONEY TUNES and SCOOBY-DOO. By day, Sholly is a mild-mannered developmental psychologist who helps to create educational TV shows, web sites, and other media for kids. Merrill Hagan is a writer who has worked on numerous episodes of the hit Teen Titans Go! TV show. He's written for many cartoons, including Bunnicula, Magic School Bus, Unikitty, Super Dinosaur, and Danger Mouse. Outside of TV, he's authored several Teen Titans Go! comic books and other projects for Marvel, DC, IDW, and Virgin.