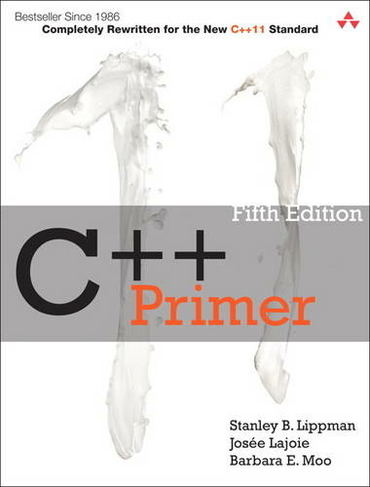 Also available on eBook for £31.79. Click here to purchase from Rakuten Kobo

Bestselling Programming Tutorial and Reference Completely Rewritten for the New C++11 Standard Fully updated and recast for the newly released C++11 standard, this authoritative and comprehensive introduction to C++ will help you to learn the language fast, and to use it in modern, highly effective ways. Highlighting today's best practices, the authors show how to use both the core language and its standard library to write efficient, readable, and powerful code. C++ Primer, Fifth Edition, introduces the C++ standard library from the outset, drawing on its common functions and facilities to help you write useful programs without first having to master every language detail. The book's many examples have been revised to use the new language features and demonstrate how to make the best use of them. This book is a proven tutorial for those new to C++, an authoritative discussion of core C++ concepts and techniques, and a valuable resource for experienced programmers, especially those eager to see C++11 enhancements illuminated. Start Fast and Achieve More Learn how to use the new C++11 language features and the standard library to build robust programs quickly, and get comfortable with high-level programming Learn through examples that illuminate today's best coding styles and program design techniques Understand the "rationale behind the rules": why C++11 works as it does Use the extensive crossreferences to help you connect related concepts and insights Benefit from up-to-date learning aids and exercises that emphasize key points, help you to avoid pitfalls, promote good practices, and reinforce what you've learned Access the source code for the extended examples from informit.com/title/0321714113 C++ Primer, Fifth Edition, features an enhanced, layflat binding, which allows the book to stay open more easily when placed on a flat surface. This special binding method-notable by a small space inside the spine-also increases durability.

Stanley B. Lippman has retired back to the Catalina Foothills where he is working on EEEK!, a computational model of the nervous system of the House Mouse, and An Off By One Error, a speculative novel set in the Northwestern Rain Forest. During his professional career, Stanley served as Distinguished Consultant for the Jet Propulsion Laboratory, Architect for the Visual C++ development group at Microsoft, member of technical staff at Bell Laboratories, two stints in Massive Multiplayer Online Gaming, and a surprisingly long stint in Feature Animation at Disney, DreamWorks, Pixar, and PDI. Stanley will be most remembered for his many years working with Dr. Stroustrup on the implementation of cfront, the standard implementation of C++ until the ISO standard. Josee Lajoie, now at Pixar, was a member of IBM Canada's C/C++ compiler development team, and chaired the core language working group for the original ANSI/ISO C++ standardization committee. Barbara E. Moo has nearly thirty years of software experience. During her fifteen years at AT&T, she worked closely with C++ inventor Bjarne Stroustrup and managed the C++ development team for several years.