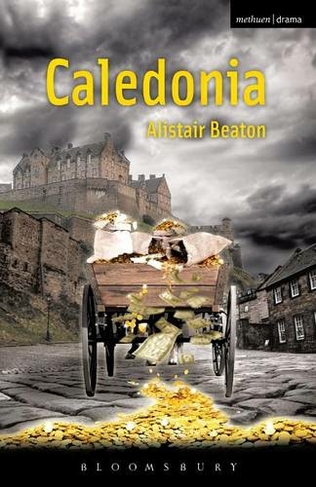 Caledonia is a story of greed, euphoria and mass delusion. It is the story of a small, poor country mistaking itself for a place that is both big and rich. It is an ancient story for modern times. William Paterson was a financial adventurer who in 1698 devised one of the most daring and disastrous speculations of all time. His plan: to found a Scottish colony in Darien on the isthmus of Panama in Central America and turn Scotland, one of the poorest nations in Europe, into a prosperous colonial power. He invited the public to invest. And they did - in a big way. Within weeks a vast proportion of the nation's wealth had been subscribed. What went wrong? Distance, disease, corruption and culpability all played a part in this ruinous episode. Within a few years, the Scots - demoralised and impoverished - gave up their nation's independent status and signed the 1707 Treaty of Union with England. Inspired by documents, journals, letters, songs and poems of the period, celebrated playwright and satirist Alistair Beaton has created a work that is both a tribute to heroic ambition and a darkly witty take on the deceptions and self-deceptions of rich and poor alike. Caledonia will headline the Edinburgh International Festival, in a co-production with the National Theatre of Scotland and directed by Anthony Neilson, opening on 13 August 2010.

Alistair Beaton is a well-known Scottish writer, whose plays and translations include Feelgood, King of Hearts and Follow My Leader, Max Frisch's The Arsonists, and Brecht's Caucasian Chalk Circle. For television, he wrote the award-winning A Very Social Secretary (2005) and the Channel 4 film The Trial of Tony Blair (2007).