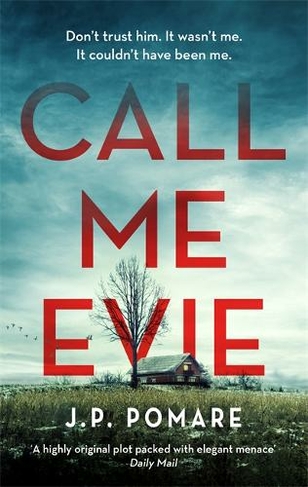 Call Me Evie: The Australian Bestseller with a jaw-dropping twist

WINNER OF THE 2019 NGAIO MARSH AWARD FOR BEST FIRST NOVEL ONE OF THE TIMES' BEST CRIME FICTION BOOKS OF 2019 'I read it in one go' Harriet Tyce, author of BLOOD ORANGE 'A smart, propulsive thriller' Kate Hamer, THE GIRL IN THE RED COAT 'One of the most striking debuts I've read in years' A. J. Finn, author of THE WOMAN IN THE WINDOW **** Don't trust him. It wasn't me. It couldn't have been me. Meet Evie, a young woman who has fled with her uncle to the isolated New Zealand beach town of Maketu. Jim says he's hiding her to protect her, that she did something terrible back home in Melbourne. Something Evie can't remember. But Evie isn't her real name. And Jim isn't really her uncle. In a house that creaks against the wind, Evie pieces together the events that led her here. And as her memories return, she starts to wonder if Jim is really her saviour . . . or her captor. A compulsive, twist-filled debut that explores the fragility of memory, perfect for fans of Sharp Objects, Room and Top of the Lake. **** 'A highly original plot which has a dash of a knowing literary flourish. The writing is restrained and packed with an elegant menace. This is a clever cautionary tale about memory and manipulation' Daily Mail 'Outstanding . . .the final pages stun with their gallows-drop plot surprises. Almost nothing will turn out as it initially appears in this devastating novel of psychological suspense' Publishers Weekly More than just a classic thriller, with a plot to keep you gripped, Pomare has created an utterly involving story of family and friendships, trust and betrayal. With each new twist you are right at the heart of the action from the clever, intriguing set-up to the unpredictable, terrifying and unforgettable conclusion' Janet Ellis, author of The Butcher's Hook 'This sublime debut walks a higher path than your average psychological suspense novel. Pomare burrows into gaslighting and control from the word go . . . a first-class literary thriller that ultimately interrogates the nature of memory and trauma' Nicolas Obregon, author of Blue Light Yokohama

JP Pomare grew up on a horse-racing farm in small town New Zealand with his three older siblings and his father. He left for Melbourne where he developed his craft, entrenching himself in the Australian literary community. For almost two years he produced and hosted a podcast called On Writing, interviewing almost thirty local and international authors including Joyce Carol Oates, John Safran, Dorthe Nors, E Lockheart, Chris Wormersley, and Sofie Laguna. J P Pomare has been published in several journals and has also won, and been short- and longlisted for a number of prizes include the KYD Unpublished Manuscript Prize. Call Me Evie is his first novel.