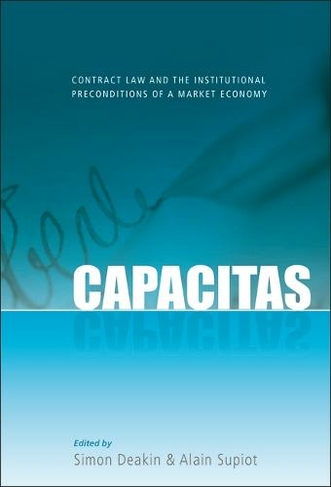 Capacitas: Contract Law and the Institutional Preconditions of a Market Economy

One of the principal tasks for legal research at the beginning of the 21st century is to reconstruct the understanding of the relationship between the legal system and the market order. After almost three decades of deregulation driven by a belief in the self-equilibrating properties of the market, the financial crisis of 2008 has reminded everyone of the fundamental truth that markets have legal and institutional foundations, without which they cannot effectively function. The chapters in the present volume are the result of work by a group of legal scholars which began in the mid-2000s, at a time when the shortcomings of deregulatory policies were becoming clear in a number of contexts. The chapters address the question of how the language of contract law describes or conceptualises the market order and the relationship of the law to it. The perspectives taken are, in turn, historical, comparative, and context-specific. The focus of the book is on a foundational idea, the concept of capacitas, which signifies a status conferred upon citizens for the purpose of enabling them to participate in the economic life of the polity. In modern legal systems, 'capacity' is the principal juridical mechanism by which individuals and entities are empowered to enter into legally binding agreements and, more generally, to arrange their affairs using the instruments of private law. Legal capacity is thereby the gateway to involvement in the operations of a market economy.

Simon Deakin is Professor of Law and Fellow of Peterhouse, University of Cambridge. Alain Supiot is Permanent Fellow of the Nantes Institute for Advanced Studies.