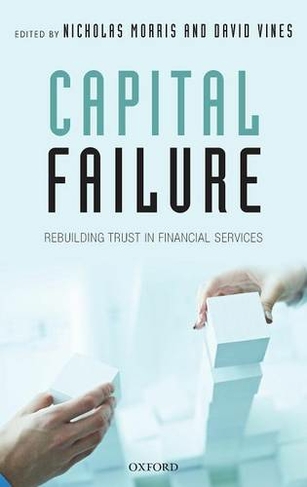 Adam Smith's 'invisible hand' relied on the self-interest of individuals to produce good outcomes. Economists' belief in efficient markets took this idea further by assuming that all individuals are selfish. This belief underpinned financial deregulation, and the theories on incentives and performance which supported it. However, although Adam Smith argued that although individuals may be self-interested, he argued that they also have other-regarding motivations, including a desire for the approbation of others. This book argues that the trust-intensive nature of financial services makes it essential to cultivate such other-regarding motivations, and it provides proposals on how this might be done. Trustworthiness in the financial services industry was eroded by deregulation and by the changes to industry structure which followed. Incentive structures encouraged managers to disguise risky products as yielding high returns, and regulation failed to curb this risk-taking, rent-seeking behaviour. The book makes a number of proposals for reforms of governance, and of legal and regulatory arrangements, to address these issues. The proposals seek to harness values and norms that would reinforce 'other-regarding' behaviour, so that the firms and individuals in the financial services act in a more trustworthy manner. Four requirements are identified which together might secure more strongly trustworthy behaviour: the definition of obligations, the identification of responsibilities, the creation of mechanisms which encourage trustworthiness, and the holding to account of those involved in an appropriate manner. Financial reforms at present lack sufficient focus on these requirements, and the book proposes a range of further actions for specific parts of the financial industry. 5 Figures, 1 Table

Nicholas Morris is Academic Visitor and Senior Research Associate at Balliol College, Oxford. He is an economist with 35 years of wide-ranging experience: in the finance, water, energy, transport, telecoms, and health sectors; in infrastructure provision; and in the design of regulatory structures. He was a co-founder and then Chief Executive of London Economics, for a period of 14 years, and, prior to that, was Deputy Director of the Institute for Fiscal Studies.Nicholas has an M.A. in Engineering and Economics and an M.Phil. in Economics from Balliol College, Oxford. He has been a visiting Professor of City University, a Governor of the charity 'Research into Ageing', a Fellow of Melbourne University and a Guest Professor at the China Executive LeadershipAcademy, Pudong. During the last 12 years he has worked extensively in Australia, South East Asia, and China advising governments, regulators, and companies.David Vines is a Professor of Economics and a Fellow of Balliol College at Oxford University. He obtained a BA in Economics and Mathematics from Melbourne University, and an MA and PhD in Economics from the University of Cambridge. His research has been on international macroeconomics and on global governance and his early work was with James Meade in Cambridge on the construction of inflation-targeting regimes. Between 1994 and 2000 he was the Director of an ESRC Research Programme on GlobalEconomic Institutions, and from 2008 to 2012 he was the Research Director of a European Union Framework Seven Research Program, PEGGED, on the Politics and Economics of Global Governance: the European Dimension. Fifteen years ago he organized an interdisciplinary seminar on integrity with thephilosopher Alan Montefiore, the proceedings of which were published as A. Monetefiore and D. Vines, Integrity in the Public and the Private Domains (Routledge, 1999).