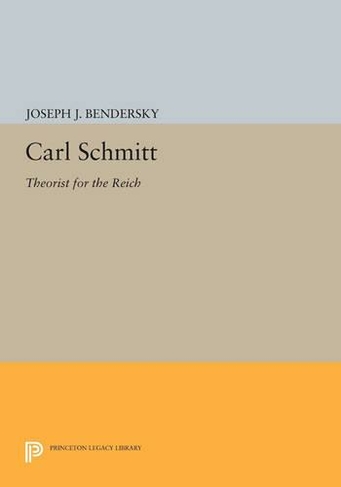 Basing his work on the writings of Schmitt and his contemporaries, extensive new archival documentation, and parts of Schmitt's personal papers, Professor Bendersky uses Schmitt's public career as a framework for re-evaluating his contributions to political and legal theory. This book establishes that Schmitt's late Weimar writings were directed at preventing rather than encouraging the Nazi acquisition of power. Originally published in 1983. The Princeton Legacy Library uses the latest print-on-demand technology to again make available previously out-of-print books from the distinguished backlist of Princeton University Press. These editions preserve the original texts of these important books while presenting them in durable paperback and hardcover editions. The goal of the Princeton Legacy Library is to vastly increase access to the rich scholarly heritage found in the thousands of books published by Princeton University Press since its founding in 1905.