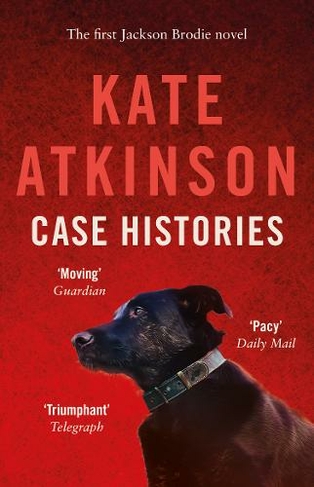 By Kate Atkinson (Author)
Paperback
https://www.whsmith.co.uk/products/case-histories-jackson-brodie-jackson-brodie/kate-atkinson/paperback/9780552772433-12-000.html £7.37 rrp £8.99 Save £1.62 (18%)
GBP
Availability
In Stock
Free Delivery Available When You Spend £25 Or More
Details
Spend £25 On Eligible Products To Receive Free Standard Delivery To You Home Or Free Next Working Day Click And Collect To Store
Share

The first Jackson Brodie novel: literary crime from the prizewinning, number-one bestselling author of Big Sky and Transcription. 'An astonishingly complex and moving literary detective story that made me sob but also snort with laughter. It's the sort of novel you have to start rereading the minute you've finished it' Guardian Cambridge is sweltering, during an unusually hot summer. To Jackson Brodie, former police inspector turned private investigator, the world consists of one accounting sheet - Lost on the left, Found on the right - and the two never seem to balance. Surrounded by death, intrigue and misfortune, his own life haunted by a family tragedy, Jackson attempts to unravel three disparate case histories and begins to realise that in spite of apparent diversity, everything is connected...

Kate Atkinson is one of the world's foremost novelists. She won the Costa Book of the Year prize with her first novel, Behind the Scenes at the Museum. Her three critically lauded and prizewinning novels set around World War II are Life After Life, A God in Ruins (both winners of the Costa Novel Award), and Transcription. She was appointed MBE for services to literature in 2011.Her bestselling literary crime novels featuring former detective Jackson Brodie, Case Histories, One Good Turn, When Will There Be Good News? and Started Early, Took My Dog became a BBC television series starring Jason Isaacs. Jackson Brodie returns in her new novel Big Sky.