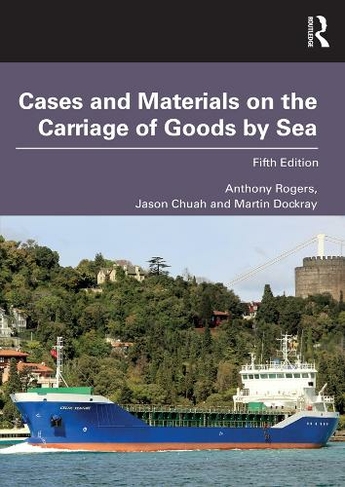 Cases and Materials on the Carriage of Goods by Sea: (5th New edition)

Cases and Materials on the Carriage of Goods by Sea, fifth edition, offers tailored coverage of the most commonly taught topics on Carriage of Goods by Sea courses. Combining a collection of legislative materials, commentaries, scholarly articles, standard forms and up-to-date English case law, it covers the major areas of chartering and bills of lading as well as matters such as exclusion and limitation of liability. Significant innovations for this edition include: coverage of blockchain technology and smart contracts in shipping coverage of autonomous shipping recent developments on the construction of commercial shipping contracts recent developments on the transfer of rights and liabilities in the contract of carriage tables and diagrams for ease of reading discussion of some of the most important decisions by the senior courts of England and Wales, with the most up to date case law included references to academic and professional literature for further reading and research industry standard form clauses reference to important foreign cases emphasis on how it is that shipping law operates and is applied in commercial practice A clear, student-friendly text design with a strong emphasis on research and problem solving. This up-to-date collection of materials relating to the carriage of goods by sea will be of value to students of law, researchers and legal practitioners. 3 Line drawings, black and white; 2 Tables, black and white