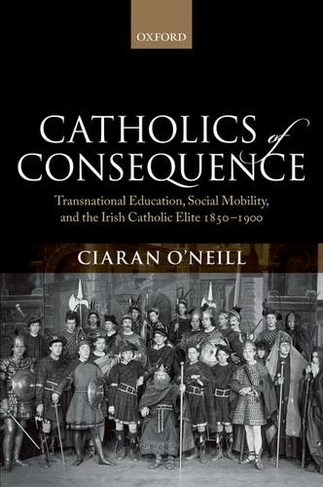 For as far back as school registers can take us, the most prestigious education available to any Irish child was to be found outside Ireland. Catholics of Consequence traces, for the first time, the transnational education, careers, and lives of more than two thousand Irish boys and girls who attended Catholic schools in England, France, Belgium, and elsewhere in the second half of the nineteenth century. There was a long tradition of Irish Anglicans and Catholics sending their children abroad for the majority of their formative years. However, as the cultural nationalism of the Irish revival at the end of the nineteenth century took root, Irish Catholics who sent their children to school in Britain were accused of a pro-Britishness that crystallized into still recognisable terms of insult such as West Briton, Castle Catholic, Squireen, and Seoinin. This concept has an enduring resonance in Ireland, but very few publications have ever interrogated it. Catholics of Consequence marks the first ever attempt to analyse the education and subsequent lives of the Irish children that received this type of transnational education. It also tells the story of elite education in Ireland, where schools such as Clongowes Wood and Castleknock College were rooted in the continental Catholic tradition, but also looked to public schools in England as exemplars. Taken together it tells the story of an Irish Catholic elite at once integrated and segregated within what was then the most powerful state in the world. numerous black and white maps and illustrations

Ciaran O'Neill's interests are particularly focused on transnational and social history, with a particular emphasis on connections shared between Ireland, Britain, and both Imperial and European networks.