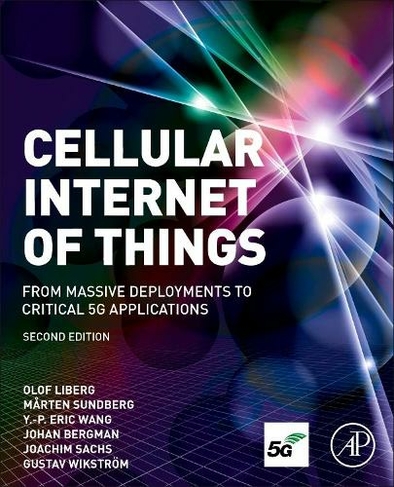 Cellular Internet of Things: From Massive Deployments to Critical 5G Applications, Second Edition, gives insights into the recent and rapid work performed by the 3rd Generation Partnership Project (3GPP) and the Multefire Alliance (MFA) to develop systems for the Cellular IoT. Beyond the technologies, readers will learn what the mMTC and cMTC market segments look like, deployment options and expected performance in terms of system capacity, expected battery lifetime, data throughput, access delay time and device cost, regulations for operation in unlicensed frequency bands, and how they impact system design and performance. This new edition contains updated content on the latest EC-GSM IoT, LTE-M and NB-IoT features in 3GPP Release 15, critical communication, i.e. URLLC, specified in 3GPP Release 15 for both LTE and NR, LTE-M and NB-IoT for unlicensed frequency bands specified in the Multefire Alliance (MFA), and an updated outlook of what the future holds in Industrial IoT and drone communications, amongst other topics.

Olof Liberg is a Master Researcher at Ericsson Business Unit Networks. After studies in Sweden, USA, Germany, and Switzerland, he received a bachelor's degree in Business and Economics and a master's degree in Engineering Physics, both from Uppsala University. He joined Ericsson in 2008 and has in recent years specialized in the design and standardization of cellular systems for machine-type communications and Internet of Things. He has, over the years, actively contributed to the work in several standardization bodies such as 3GPP, ETSI and the Multefire Alliance. He was the chairman of 3GPP TSG GERAN and its Working Group 1, during the 3GPP study on new radio access technologies for Internet of Things leading up to the specification of EC GSM IoT and NB IoT. Marten Sundberg is a researcher at Ericsson Business Unit Networks, with a previous position as a Senior Specialist in GSM radio access technology. He joined Ericsson in 2005 after receiving his master's degree in Engineering Physics from Uppsala University. As Rapporteur of the 3GPP Work Item on EC-GSM-IoT he was leading the technical work to standardize the new GSM-based feature dedicated for Internet of Things. In 2016, he started leading the work towards URLLC for LTE, being a Rapporteur for the Work Item introducing shortened TTI and shorter processing times. Apart from being active in the 3GPP standardization body, Marten has also worked for many years in ETSI, harmonizing radio requirements in Europe. Y.-P. Eric Wang is a Principal Researcher at Ericsson Research. He holds a PhD degree in electrical engineering from the University of Michigan, Ann Arbor. In 2001 and 2002, he was a member of the executive committee of the IEEE Vehicular Technology Society and served as the society's Secretary. Dr. Wang was an Associate Editor of the IEEE Transactions on Vehicular Technology from 2003 to 2007. He is a technical leader in Ericsson Research in the area of Internet of Things (IoT) connectivity. Dr. Wang was a corecipient of Ericsson's Inventors of the Year award in 2006. He has contributed to more than 150 US patents and more than 50 IEEE articles. Johan Bergman is a Master Researcher at Ericsson Business Unit Networks. He received his master's degree in Engineering Physics from Chalmers University of Technology in Sweden. He joined Ericsson in 1997, initially working with baseband receiver algorithm design for 3G cellular systems. Since 2005, he has been working with 3G/4G physical layer standardization in 3GPP TSG RAN Working Group 1. As Rapporteur of the 3GPP TSG RAN Work Items on LTE for machine-type communications (MTC) in Releases 13, 14, 15, and 16, he has led the technical work to standardize the new LTE-based features dedicated for Internet of Things. He was a corecipient of Ericsson's Inventor of the Year award for 2017. Joachim Sachs is a Principal Researcher at Ericsson Research. After studies in Germany, Norway, France and Scotland he received a diploma degree in electrical engineering from Aachen University (RWTH), Germany, and a PhD degree from the Technical University of Berlin. He joined Ericsson in 1997 and has worked on a variety of topics in the area of wireless communication systems, and has contributed to the standardization of 3G, 4G and 5G. Since 1995 he has been active in the IEEE and the German VDE Information Technology Society (ITG), where he is currently co-chair of the technical committee on communication networks. In 2009 he was a visiting scholar at Stanford University, USA. Gustav Wikstroem is a Research Leader at Ericsson Research in the area of Radio Network Architecture and Protocols. He has a background in Experimental Particle Physics and received his Ph.D. from Stockholm University in 2009, after Master studies in Engineering Physics in Lund, Uppsala, and Rennes. After Post-doc studies in Geneva, he joined Ericsson in 2011. He has been driving the evolution of network performance tools and studies and worked with WLAN enhancements