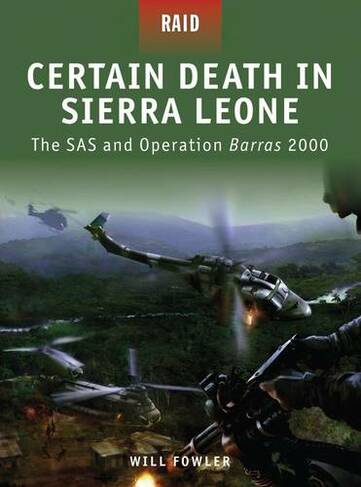 Certain Death in Sierra Leone: The SAS and Operation Barras 2000 (Raid No. 10)

In September 2000 the notorious militia gang, 'West Side Boys' kidnapped eleven British soldiers in Sierra Leone and Operation Barras was launched as the rescue operation. Fast roping in from helicopters, the SAS soldiers engaged in a heavy firefight with the militia, killing several, and capturing their leader. Meanwhile the Paras advanced on foot, fighting their way through a village to recover the Land Rovers abandoned by the kidnapped soldiers. The operation was a complete success, with all the soldiers being rescued. This daring raid is brought to life with specially commissioned artwork, detailed maps and overhead shots to recreate one of the greatest hostage-rescue success stories. Illustrations (some col.), maps

Will Fowler has worked in journalism and publishing since 1972, reporting for European, American, Asian and Arabic magazines from Europe, the USA, the Middle East, China and SE Asia. Among his more than 30 published books is the best-selling MAA 133 Battle for the Falklands: Land Forces. A TA soldier for 30 years, he was commissioned from the ranks in 4th Bn Royal Green Jackets, and volunteered for Operation 'Granby' in the Gulf, 1990-91. In 1993 he graduated from the French Army reserve staff officers course at the _cole Militaire, Paris. Will has previously written Operation Barras: The SAS Rescue Mission Sierra Leone 2000 which was serialized in the News of the World and Daily Mail newspapers. Will is married and lives in Romsey, Hampshire. The author lives in Romsey, Hampshire.