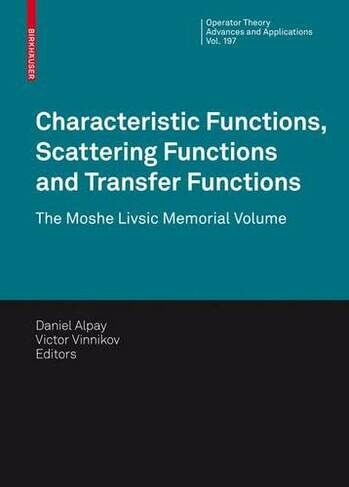 Daniel Alpay and Victor Vinnikov During the period July 9 to July 13, 2007,a conference called Characteristic fu- tions and transfer functions in operator theory and system theory: a conference dedicated to PaulFuhrmann onhis 70thanniversary and to the memory ofMoshe Livsiconhis90thanniversarywasheldattheDepartmentofMathematicsofBen- GurionUniversityoftheNegev.Thenotionsoftransferfunctionandcharacteristic functions proved to be fundamental in the last ?fty years in operator theory and in system theory. This conference was envisaged to pay tribute to our colleagues PaulFuhrmannandMosheLivsicwhoplayedacentralroleindevelopingthese- tions. Sadly, Moshe Livsic passedawayon the 30thof March,2007(11th of Nissan 5767), so the conference was dedicated to his memory. It is a pleasure to thank all the participants, who contributed to a very exciting and fruitful conference, and especially those who submitted papers to the present volume. The volume contains a selection of thirteen research papers dedicated to the memory of Moshe Livsic. The topics addressed can be divided into the following categories: Classical operator theory and its applications: This pertains to the paper Diff- ential-di?erence equations in entire functions by G. Belitskii and V. Tkachenko, the paper Bi-Isometries and Commutant Lifting by H. Bercovici, R.G. Douglas. and C. Foias and the paper Convexity of ranges and connectedness of level sets of quadratic forms by I. Feldman, N. Krupnik and A. Markus. Ergodictheoryandstochasticprocesses: We have the papersTheone-sidedergodic Hilbert transform of normal contractions by G. Cohen and M. Lin, and Integral Equations in the Theory of Levy Processes by L. Sakhnovich. Geometryofsmoothmappings:This iscoveredbythepaper ofY.Yomdinentitled ?-Spread of sets in metric spaces and critical values of smooth functions. VIII, 392 p.