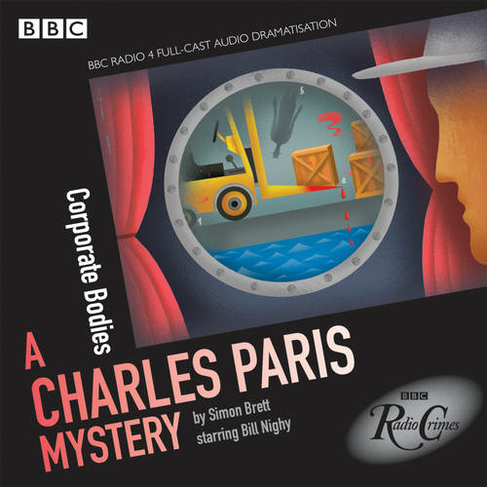 By Simon Brett (Author), Jeremy Front (Author), Bill Nighy(Read by), Suzanne Burden(Read by)
Audio Book
https://www.whsmith.co.uk/products/charles-paris-corporate-bodies-a-bbc-radio-4-fullcast-dramatisation-unabridged-edition/simon-brett/jeremy-front/audio-book/9781471343568-12-000.html £10.60 rrp £13.25 Save £2.65 (20%)
GBP
Availability
In Stock
Free Delivery Available When You Spend £25 Or More
Details
Spend £25 On Products To Receive Free Standard Delivery To Your Home Or Free Next Working Day Click And Collect To Store

A BBC Radio 4 full-cast adaptation of Simon Brett's comic murder mystery, starring Bill Nighy as the irrepressible Charles Paris. Charles Paris (unsuccessful actor, bad husband, dipsomaniac) is currently appearing as a fork lift operator in a corporate video. It's not prime-time television or a major film, but it seems like easy money - until the fork lift is used to commit a murder. When Charles himself comes under suspicion, he decides to find out for himself who the murderer is. Meanwhile, as ever with Charles, life on the domestic front is not plain sailing. After inflicting damage upon his ex-wife's house, he finds himself offering her a berth on the houseboat he's currently sitting for a friend. However, life on the water proves as tricky as life at work... Suzanne Burden, Tim McInnery and Jon Glover are also among the cast in this dramatisation by Jeremy Front. Written by Jeremy Front, based on the novel by Simon Brett. Duration: 2 hours approx.

Simon Brett was born in Worcester Park, Surrey, on 28 October 1945. He was educated at Dulwich College and Wadham College, Oxford, where he read English and was president of the Oxford University Dramatic Society.After graduating in 1967 he worked as Father Christmas in a department store before landinga job at the BBC as a radio producer. During his ten years there, he worked on such programmes as The Hitchhiker's Guide to the Galaxy, Week Ending, The Burkiss Way, I'm Sorry I Haven't A Clue and Just a Minute. He moved to London Weekend Television in 1977, where he produced Maggie and Her, End of Part One and The Glums (a popular spin-off from radio's Take It From Here).Brett's first Charles Paris novel, Cast In Order of Disappearance, was published in 1975, and by 1979 he was able to leave LWT and become a full-time writer. He has written over eighty books, including nineteen Charles Paris books, fifteen Fethering Mysteries and six Mrs Pargeter novels, as well as several non-series titles such as A Shock to the System (1984), which was adapted as a film starring Michael Caine. He has also contributed to several anthologies and scripted many sitcoms for radio including No Commitments, Smelling of Roses and After Henry. Other radio work includes several one-off plays for Radio 4, and a number of episodes of the detective series Baldi. A former Chair of both the Crime Writers' Association and The Society of Authors, he is currently President of the Detection Club, as well as being involved with various writers' organisations. He is married with three children, and lives in West Sussex. Jeremy Front is an award winning writer, actor and broadcaster. He studied Fine Art (Painting) at Goldsmith's, University of London and Central St. Martin's School of Art.His first feature length screenplay was shortlisted for the Oxford Film Foundation Prize and first theatre pieces were musical/sketch revues, co-written with his sister, Rebecca Front. Four Times Four, a collection of monologues for women was staged by the RSC in Stratford as part of their New Writing Season.Jeremy has written extensively for radio and television moving between original and adaptations in both drama and comedy. Work for BBC Radio includes the comedy series: Jack and Millie, seven series of Incredible Women (nominated BBC Audio Drama Award) in both of which he co-stars with Rebecca Front, and the long-running radio comedy series The Charles Paris Mysteries starring Bill Nighy. Jeremy has adapted and dramatized work by Graham Greene Stamboul Train, Elizabeth Gaskell Mr. Harrison's Confession, John Meade Faulkner The Lost Stradivarius, Anita Loos Gentlemen Prefer Blondes (Nominated and Finalist for a Writers' Guild of Great Britain Award), Chekov The Duel and Evelyn Waugh's Decline and Fall, Scoop, Brideshead Revisited and The Sword of Honour Trilogy (Winner of the BBC Audio Drama Award).