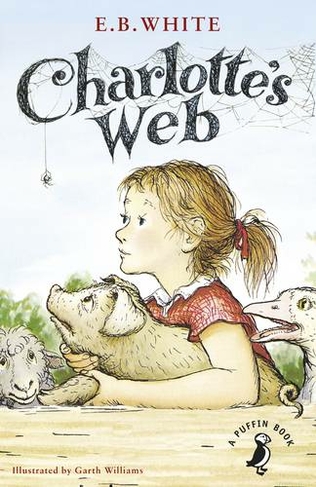 By E. B. White (Author), Garth Williams (Illustrator)
Paperback
Charlotte's Web: (Puffin Classics) is rated 5.0 out of 5 by 1.
https://www.whsmith.co.uk/products/charlottes-web/e-b-white/garth-williams/paperback/9780141354828-12-000.html £5.94 rrp £6.99 Save £1.05 (15%)
GBP
Availability
In Stock
Free Delivery Available When You Spend £25 Or More
Details
Spend £25 On Eligible Products To Recieve Free Standard Delivery To You Home Or Free Next Working Day Click And Collect To Store
Share

A Puffin Book - stories that last a lifetime. Wilbur the pig's life has already been saved by Fern, but when he is sold to her uncle, he realises his life is in even more danger. Enter Charlotte A. Cavatica, a beautiful large grey spider. Charlotte is determined to keep Wilbur from the chopping block, and comes up with an ingenious way to do just that. Charlotte's Web is a classic tale of friendship, bravery and some animal magic.

Rated 5 out of 5 by EmyG from Great gift for an animal oover Bought as a gift for an 8 year old who loves animal stories. Was a childhood favourite of mine.

E. B. White (Author) E. B. White was born in New York in 1899 and died in 1985. He kept animals on his farm in Maine and some of these creatures crept into his books, such as STUART LITTLE which was recently made into a blockbusting film. He received many awards including the Laura Ingalls Wilder Medal in 1970, an award given every five years to authors who have 'made a substantial and lasting contribution to literature for children'.Garth Williams (Illustrator) Garth Williams was born in 1912 and became one of American's best-loved illustrators.His magical drawings have brought to life many memorable children's book characters, including Fern, Wilbur, and Charlotte inCharlotte's Web and the adventurous little mouse, Stuart Little.Garth Williams died in 1996, at the age of 84.