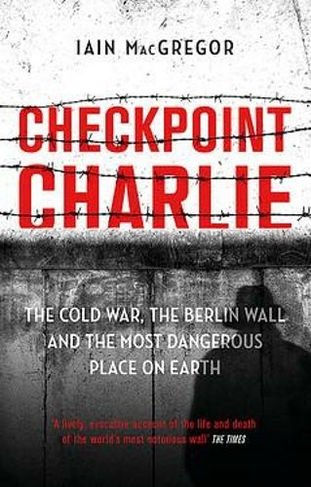 Checkpoint Charlie: The Cold War, the Berlin Wall and the Most Dangerous Place on Earth

By Iain MacGregor (Author)
Paperback
https://www.whsmith.co.uk/products/checkpoint-charlie-the-cold-war-the-berlin-wall-and-the-most-dangerous-place-on-earth/iain-macgregor/paperback/9781472130594-12-000.html £9.01 rrp £10.99 Save £1.98 (18%)
GBP
Availability
In Stock
Free Delivery Available When You Spend £25 Or More
Details
Spend £25 on eligible products to receive free standard delivery to home or free next working day click and collect to store
Share

'As convoluted and deadly as the plot of a novel by John le Carre, but all too real' Daily Mail, Must Reads 'With a gripping narrative and vivid interviews with those on all sides whose lives were directly affected by that grim symbol of the East-West divide that poisoned Europe for almost half a century, [MacGregor] has made an important contribution to the history of our times' Jonathan Dimbleby 'Captures brilliantly and comprehensively both the danger and exhilaration that I and other reporters, soldiers, and people experienced intersecting with the wall - a must-read for anyone who wants to understand the Europe we have inherited' Jon Snow A powerful, fascinating, and ground-breaking history of Checkpoint Charlie, the legendary and most important military gate on the border of East and West Berlin where the United States and her allies confronted the USSR during the Cold War. As the thirtieth anniversary of the fall of the Berlin Wall approaches in 2019, Iain MacGregor captures the mistrust, oppression, paranoia, and fear that gripped the city throughout this period. Checkpoint Charlie is about the nerve-wracking confrontation between the West and the Soviet Union that contains never-before-heard interviews with the men who built and dismantled the Wall; lovers who crossed it; relatives and friends who lost family trying to escape over it; German, British, French, and Russian soldiers who guarded its checkpoints; CIA, MI6 and Stasi operatives who oversaw secret operations across its borders; politicians whose ambitions shaped it; journalists who recorded its story; and many more whose living memories contributed to the full story of Checkpoint Charlie. A brilliant work of historical journalism, Checkpoint Charlie is an invaluable record of this period.

Iain MacGregor is an editor and publisher of nonfiction in the UK. His father served with the British Army on the Rhine in the 1950s, and enjoyed R&R in West Berlin. As a student he visited the Baltic and the Soviet Union, avidly followed events that unfolded in Berlin on the night of 9th November 1989 when the Wall fell and then LATER travelled through into the former Warsaw Pact territories and Berlin, visiting Checkpoint Charlie, still untouched. He lives with his wife and two children in London.