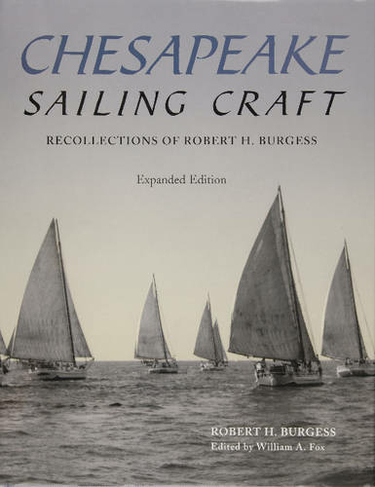 Thirty years have passed since the 1975 publication of Robert H. Burgess's classic Chesapeake Sailing Craft, and while the original edition of this book has been out of print for many years, this new expanded edition brings alive the author's photographs and recollections for a new generation of readers. Within these pages, Burgess presents a rare photographic record of the period 1925Aca"1975, depicting the bay sailing craft from log canoe to four-masted schooner. Robert H. Burgess's photographs show the vessels in all phases of their activities on these waters, including loading and unloading cargoes, under sail and in port, in shipyards, details of rigging, fittings, and decks, interior views, as powerboats, and abandoned hulks. No one has so thoroughly photographed the Chesapeake sailing vessels as Burgess. He applied himself to the task as though he were getting paid for it. But it was purely through a feeling for the history of the bay and its craft, an awareness that a change was taking place, that he pursued his subject so persistently. If he had not undertaken this labor of love, most of the sailing vessels in this volume would have passed on with no photographic record of their ever having existed. This edition showcases the original text, photos, and captions and adds 150 new photos with captions by William A. Fox. The result is Chesapeake Sailing Craft: Recollections of Robert H. Burgess, a new and expanded edition of the original volume for bay enthusiasts to enjoy. As in the original edition, all the photos in this book were taken by Robert Burgess. They appear as he saw them through the viewfinder of his camera and as he printed them in the darkroom, uncropped and unretouched. 463 b/w photos

There is scarcely a river, creek, or slough in the Chesapeake Bay Country that Robert H. Burgess (1913a2003) did not explore with his camera. Known to many as Dean of the Chesapeake, Robert aBoba Burgess knew the Chesapeake Bay in its older, more primitive, and pleasant way of life. He saw the era of commercial sail and steam fading and undertook to document and preserve bay watercraft through photography. Without this labor of love, most of the sailing vessels in his book would have passed on with no photographic record of their existence. Baltimore-born, Burgess joined the staff of the Marinersa Museum in Newport News in 1941, where he became curator of exhibits and was later named curator of publications. He was a member of the Steamship Historical Society of America, on the Board of Governors of the Chesapeake Bay Maritime Museum, and a trustee of the Calvert Marine Museum and Chesapeake Bay Foundation. In 2000, The Chesapeake Maritime Museum presented Robert H. Burgess th