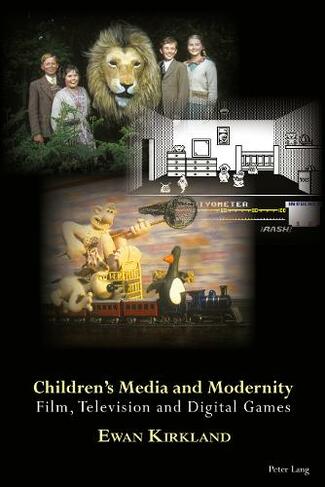 Throughout the modern era the figure of the child has consistently reflected adult concerns about industrialisation, urbanisation, technology, consumerism and capitalism. Children represent a symbolic retreat from modern life, culturally aligned with fairy tales, medievalism, animals and nature. Yet children also embody the future and are often identified with the most contemporary forms of popular culture. This book explores how products for children navigate such contradictions by investigating the history and textuality of three major forms of modern media: cinema, television and digital games. Case studies - including Wallace and Gromit, Teletubbies, Horrible Histories, Little Big Planet and Disney Infinity - are used to illustrate the complex intersections between children's culture and modernity. Cinema - so closely associated with the emergence of modernity and mass popular culture - has had to negotiate its relationship with child audiences and depictions of childhood, often concealing its connection with modernity in the process. In contrast, television's incorporation into family home-centred, post-war modernity resulted in children being clearly positioned as the audience for this domestic entertainment. The latter decades of the twentieth century saw the promotion of home computers as educational tools for training future generations, capitalising on positive alignments between children and technologies, while digital games' narrative references, aesthetics and merchandise established the new medium as a form of children's culture.

Ewan Kirkland lectures in Film and Screen Studies at the University of Brighton. He has previously published on The Powerpuff Girls, the Twilight series and horror videogames, and has organised academic conferences on science fiction, zombies in popular culture and the My Little Pony franchise. In his work he focuses on issues of representation - particularly dominant identities such as masculinity, whiteness and heterosexuality - and on the construction of childhood through media for children.