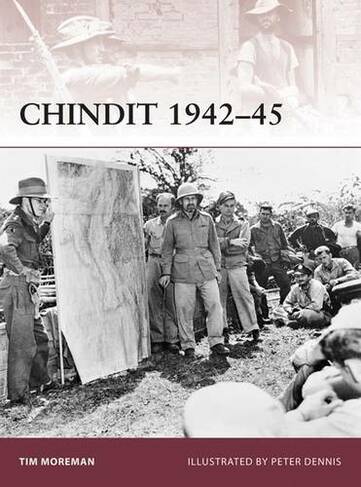 The Chindits were a specially organized, equipped and trained body of men employing innovative fighting methods based on ideas originally developed by Major-General Orde Wingate. Raised to fight deep behind Japanese lines in the Burmese Jungle in World War II, their contribution to the Allied cause remains controversial to this day. Accompanied by full-colour illustrations this book describes the origins of this elite formation, detailing their recruitment, training and specialist fighting methods, and reveals the distinctive dress, equipment and weapons used, as well as the immense hardships suffered by the officers and men involved. Illustrations (some col.)

Tim Moreman is a freelance writer and academic. For several years he lectured in the Department of War Studies at King's College London, from where he obtained his PhD. He also held a six-month appointment as Resident Historian at the Army Staff College at Camberley. His primary interests include the British-Indian Army during the 19th and 20th centuries, counterinsurgency, and the British and Commonwealth armies during World War II. In addition to a significant number of articles and papers, Tim has written two major books: a study of the Indian Army on the North-West Frontier 1849-1947, and a book on the war in Burma and Malaya 1941-45. In recent years he has also worked for the new Dictionary of National Biography and the Australian War Memorial, as well as acting as a historical adviser for the BBC and Carlton Television. He is based in Somerset, UK.