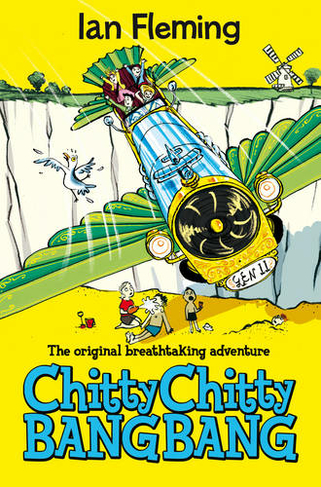 'Crackpot' is what everybody calls the Pott family. So when they go to buy a new car and come back with a WRECK, nobody is surprised. Except for the Potts themselves. First, the car has a name. And she tells them what it is. Then they find that she can fly . . . and swim . . . Chitty Chitty Bang Bang is a car on a mission to stop a criminal gang in its tracks - and she is taking the Potts with her! Jump into the world's most loved magical car, for her first adventure ever! EU Toy Safety Directive - No warning EU Toy Safety Directive - Carries minimum age warning

Ian Fleming - famous across the globe for creating James Bond - loved cars. And the faster the car, the better. It was this love that inspired him to write his only children's book - CHITTY CHITTY BANG BANG: THE MAGICAL CAR - about a car that could fly. Fast. He wrote it for his little boy, Caspar, when Fleming was recovering from a heart attack and his wife had hidden his typewriter to force him to rest. He wrote it secretly and in longhand, eventually sending it to his bemused editor who had been expecting a new Bond novel. CHITTY CHITTY BANG BANG, published just after Fleming's death, became an immediate bestseller. It has been reinvented as a musical and as a film (with the screenplay written by Roald Dahl). It is a jewel in the crown of children's fiction in the UK and across the world.