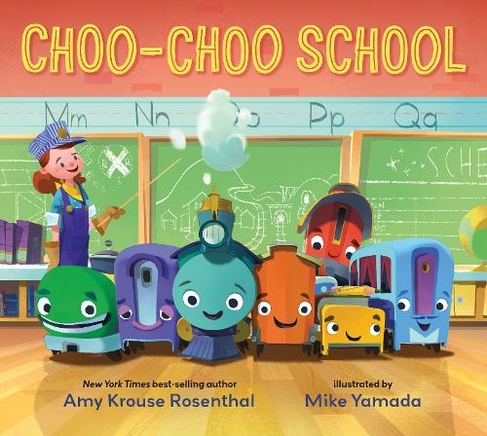 No racing in the haul-ways! A look at seven adorable train cars on their first day of school. All aboard! A new line-up of students is off and rolling to Choo-Choo School. After reciting their classroom rules - Work hard, play fair, be kind - it's time for some maths to get the wheels turning. Then everyone's ready to climb a hill in P.E. (it's good to blow off steam), sing songs in music (Flat Car is a bit off key) and learn the whole alphabet, especially the letter R. Bouncy verse portrays a world where train stations are classrooms, the conductor doubles as teacher, and Boxcar is happy to hand out tissues to anyone who ah-choo-choos. Bright, energetic illustrations by animation artist Mike Yamada bring the whole clickety crew to rollicking life.

Amy Krouse Rosenthal (1965-2017) was the award-winning author of more than thirty books for children, including Little Pea, Uni the Unicorn, and Spoon. She also wrote a memoir titled Encyclopedia of an Ordinary Life, made short films, and contributed to America's National Public Radio, along with many other creative endeavours.Mike Yamada is the author-illustrator of Cool Cat Versus Top Dog and the illustrator of other books for children, including Bedtime Blastoff and Kai to the Rescue! He has also worked as an animator with Disney and Dreamworks, with credits on film projects such as Big Hero 6 and How to Train Your Dragon. He lives in Los Angeles. Find him online at myamada.com and on Twitter as @michaelyamada.