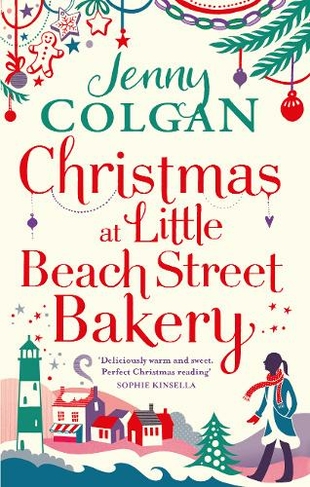 'Nobody does cosy, get-away-from-it-all romance like Jenny Colgan' Sunday Express ___________________________________ In a Cornish coastal village, a tiny bakery serves the best hot chocolate you can possibly imagine 'An evocative, sweet treat' Jojo Moyes 'Gorgeous, glorious, uplifting' Marian Keyes 'A cracker - the must-read this festive season' Sun 'Irresistible' Jill Mansell 'Just lovely' Katie Fforde 'Naturally funny, warm-hearted' Lisa Jewell 'A gobble-it-all-up-in-one-sitting kind of book' Mike Gayle It's Christmas Mount Polbearne - a time for family, friends and feasting. Polly Waterford loves running the Little Beach Street Bakery. She's at her happiest when she's creating delicious treats and the festive season always inspires her to bake and knead something extra special for the village residents. In fact, the only thing she loves more than her bakery is curling up with her gorgeous boyfriend, Huckle. She's determined that this Christmas is going to be their best one yet, but life doesn't always work out as planned... When Polly's best friend Kerensa turns up with a secret that threatens the life Polly and Huckle have built together, the future begins to look uncertain. And then a face from Polly's past reappears and things become even more complicated. Polly can usually find solace in baking but she has a feeling that's not going to be enough this time. Can she get things back on track so that everyone has a merry Christmas? ___________________________________ Why readers ADORE Jenny Colgan 'Jenny Colgan has a way of writing that makes me melt inside' 'Her books are so good I want to start over as soon as I have finished' 'There's something so engaging about her characters and plots' 'Her books are like a big, warm blanket' 'Her stories are just so fabulous' 'She brings her settings and characters so vividly to life' 'The woman is just magic'

Jenny Colgan is the author of numerous Sunday Times bestselling novels and has won various awards for her writing, including the Melissa Nathan Award for Comedy Romance, the RNA Romantic Novel of the Year Award and the RNA Romantic Comedy Novel of the Year Award. Her books have sold more than five million copies worldwide and in 2015 she was inducted into the Love Stories Hall of Fame. Jenny is married with three children and lives in Scotland.For more about Jenny, visit her website and her Facebook page, or follow her on Twitter and Instagram.Twitter: @jennycolganFacebook: jennycolganbooksInstagram: jennycolganbooks