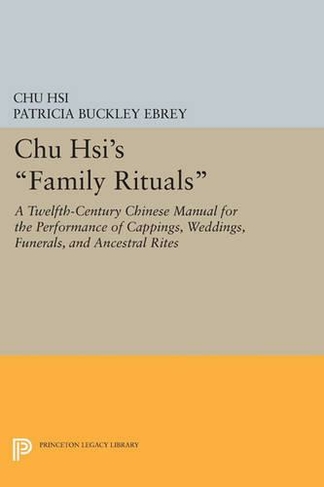 Compiled by the great Neo-Confucian philosopher Chu Hsi (1130-1200), the Family Rituals is a manual for the private performance of the standard Chinese family rituals: initiations, weddings, funerals, and sacrifices to ancestral spirits. This translation makes the work, which is the most important text of its kind in the last thousand years of Chinese history, fully accessible to scholars and students in a wide range of fields. The militantly Confucian Family Rituals was designed to combat the practices of Buddhist and other non-Confucian rites, and it was quickly recognized as the standard authority by the state, the educated elite, and even by many uneducated commoners. With the spread of Neo-Confucianism, it was honored also in Vietnam, Korea, and Japan. Patricia Buckley Ebrey has added notes showing how the Family Rituals enhances our understanding of Chinese society and culture. She cites many of the commentaries on the work to give a sense of its uses in the centuries after its publication. Originally published in 1991. The Princeton Legacy Library uses the latest print-on-demand technology to again make available previously out-of-print books from the distinguished backlist of Princeton University Press. These editions preserve the original texts of these important books while presenting them in durable paperback and hardcover editions. The goal of the Princeton Legacy Library is to vastly increase access to the rich scholarly heritage found in the thousands of books published by Princeton University Press since its founding in 1905.